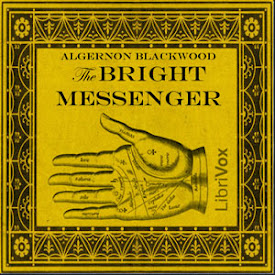 Julian LeVallon, born and raised alone in the Jura Mountains, is referred to psychiatrist Dr. Edward Fillery for care in London. But is LeVallon merely a schizophrenic with a secondary personality, "N.H." (non-human), or is he really an Elemental Being, a "bright messenger" who brings, perhaps, a new age of human evolution? And if so, is the human race ready for a major step forward? [Summary by Mark Nelson] (14 hr 50 min)

The pacing is a huge stumbling block, hooking you with enigma and substance at the beginning of the story before throwing the brakes and glacially grinding through countless subsequent dry, repetitive, and even for Blackwood heavy handed emanations lesser in their form than when they first appeared. Full disclosure, I gave it up around 7 hours, but were it a physical tome which placed the burden of reading on me rather than the quality narrator enjoyed by this upload, i would have dropped it after one.

The reading by Mark Nelson is brilliant as always. The book itself is interesting but it does waffle a bit. The author definitely preferred to use 50 words in many cases where 4 would do. This did tend to make me lose interest in parts. Is it worth a listen? For me it was hard work....the whole book was 10 chapters crammed into 27.

First of all i like The author and Love Mark Nelson (would rate Mark's reading at a 5 but dont want to mislead about the book). At first i wanted to disagree with the other reviews but after about 1/2 way in i was struggling to even be interested. The story started well and the storyline was interesting. But, then it then gets bogged down with a lot of un neccessary "dialogue" that feels disjointed and distracted from the story. The author may have intended parts to be boring like reading a medical report, if so he nailed it. It sort of felt like someone else had written the latter portion after a quick reading of the first part.

The book starts well enough, then becomes very interesting. for the first 4 chapters or so I felt other reviewers may have been mistaken. but then things go awry. I'm not sure if the book is philosophical, religious or an exploration of the authors thoughts on psychoanalysis, but it seems to be all three and that's an unhappy mix. its also laced with endless moralising which is turgid and annoying as is the dreadful depictions of women (either mothers or whores) and the occasional barb at foreigners and those born out of wedlock. these were doubtless the standards of the Time when the book was written but compounded by the wandering and nonsensical narrative. Then there is a large portion devoted to describing what I can only assume to be an acid trip. the best bit of the whole book is where a character is referred to as listening in the manner of someone who doesn't care about it but just wants it to end and I felt seen.

I enjoyed the premise of the story and the character nh. to the listener who has a problem with it not paying heed to their religion... it's a story, enjoy it for what it is, not meant to be a bible.

I enjoyed this story but I found it rather drawn out at times. There were some parts I was a little confused. Mark's fantastic reading made it all worthwhile.

The book was ok. It has many good qualities and is a thought provoking subject. I just couldn't get into it. It happens that way sometimes.