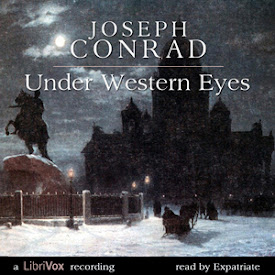 Under Western Eyes (1911) is a novel by Joseph Conrad. The novel takes place in St. Petersburg, Russia, and Geneva, Switzerland, and is viewed as Conrad's response to the themes explored in Crime and Punishment, Conrad being reputed to have detested Dostoevsky. It is also, some say, Conrad's response to his own early life; his father was a famous revolutionary imprisoned by the Russians, but, instead of following in his father's footsteps, at the age of sixteen Conrad left his native land forever....This novel is considered to be one of Conrad's major works and is close in subject matter to The Secret Agent. It is full of cynicism and conflict about the historical failures of revolutionary movements and ideals. Conrad remarks in this book, as well as others, on the irrationality of life, the opacity of character, the unfairness with which suffering is inflicted upon the innocent and poor, and the careless disregard for the lives of those with whom we share existence. - Summary by Wikipedia (11 hr 1 min)

A story well and clearly read .Any one who has read Crime and Punishment will see how the set of characters is similar and diffetent.There is no betrayal in C and P and inspite of being set in the same political climate the crime is non political.But in both there is the compulsion to confess, and the terrible innocence of a mother, and sister, and the appalling poverty of the people. There is no Onlooker In C and P, but the Author of one is the onlooker of both and sees the folly of Russian belief in how order can be maintained,, how change can be made, how ideas can become a reality to serve all. Nrither Author knew that in the 21st century autocracy would give way to popular revolution which would become dictatorship and ideas of the Thinkers once more fail to bring about the solution to the problems of Truth and Lies, Right and Wrong, that the West thinks it has settled.

Excellent reader... as for the story... I cannot improve upon the synopsis... I do think this requires full focus and thought...I listen to stories while doing something else... could not do so with this

excellent clear reading. book is interesting suspenseful and original but was disappointed by it

Of a tyranny that continues today

A skillful and complex story