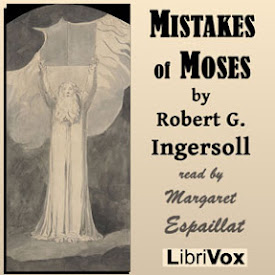 Robert G. Ingersoll was an extremely popular humanist orator in the late nineteenth century, and he wrote Mistakes of Moses after many bootlegged versions of his speeches had been published and circulated. In Mistakes of Moses, through a close, literal reading of the Pentateuch, he challenges biblical stories using science, logic and morality. (Summary by Margaret) (5 hr 58 min)

It is almost impossible to grasp that this is considered by some to be reasonable and even enlightening. He babbles almost continuously about logic and free thinking and reason, but uses none himself,he presents the Bible as being under review, and carefully points out what he sees as flaws based on...what exactly??...his own perceived views as being infallible. It is like if an infant were to write a book criticizing that all people would be so foolish as to have something as nonsensical as toilets, and then use all the logic they can comprehend to point out how unreasonable and against everything that they can experience in nature it is to put effort into building and maintaining these toilets when nature itself tells us that it is against our very biological understanding to do something the infant cannot understand because it knows nothing more that the diaper it wears and is incapable of grasping that it should learn to use the toilet. Poor fool...it is only when it will begin to use this toilet that it will be able to grasp why one should use it. I pity those who agree with this and then spend the rest of their lives trying to find what the meaning is of life.

Excellent From Stem To Stern!

Beautifully read and brilliantly written! Freedom of religion (or no religion) and freedom of speech enable the freedom of thought and action-thereby enriching our lives! What a brilliant tool. Tell the people they are born into a separation from their maker due to their evil nature. Tell them they are bound for eternal punishment and their only salvation is attending their church, censuring their own thoughts and behaviour according to a kooky bronze age morality, and giving them 10% of your pre-tax income?!?! WHAT A RACKET!!! It's almost like telling everyone there's a deadly virus running rampant and their only cure is your patented snake oil! Problem-Reaction-Solution! It works every time!

So… you are saying, Mr. Ingersoll, that, while the infallible is fallible and easily proven so, YOU are infallible, and thus cannot be mistaken. That’s interesting! 0.5 stars.

the title is just the tip of the iceberg. very interesting discussion of conflicting information in the Bible.

I wish I had known about this man & his writing many years before!

Ingersoll is A Nineteenth century version of Christopher Hitchens. Excellent book and reader

Awesome read, questions bible at its own practicality.

this is a great discussion about the absurdities of the bible