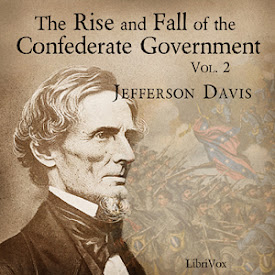 The Rise and Fall of the Confederate Government, Volume 2

"The most painful pages of this work are those which . . . present the subjugation of the State governments by the Government of the United States. The patriot, the lover of his country and of the liberties of mankind, can not contemplate these facts without a feeling of grief which will not be comforted. That the work of the fathers of the republic, that the most magnificent system of constitutional government which the wisdom of man has devised, should be turned from its object, changed from its order, rendered powerless to protect the unalienable rights and sovereignty of the people, and made the instrument by which to establish and maintain imperialism, is a revolution unlike any other that may be found in the history of mankind. The result established the truthfulness of the assertion . . . that the Northern people, by their unconstitutional warfare to gain the freedom of certain negro slaves, would lose their own liberties." (from chapter 42)

This project contains Volume 2 (of 2).

Read by William A Crenshaw

Chloroform in print, That’s what Mark Twain said about a book he once read. That’s said I believe this man was very intelligent and knew the constitution . He makes some very good points about secession , states rights and so forth. It’s a bit self-righteous but it’s still worth listening too . It’s a different perspective from what most people generally learn. I’m thankful to the volunteers who had to endure reading this.In all seriousness this book could’ve been a lot better with some judicious editing. I think if you took the word chivalry out of this book you would lighten it by about 2 pounds. That said in regard to the war and all of its horrors it would be hard to find people who better deserve the title.