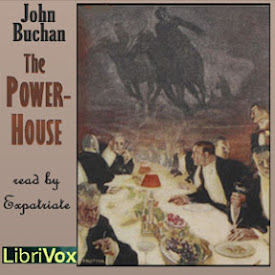 The Power-House is a novel by John Buchan, a thriller set in London, England. It was written in 1913, when it was serialised in Blackwood's Magazine, and it was published in book form in 1916. The narrator is the barrister and Tory MP Edward Leithen, who features in a number of Buchan's novels. The urban setting contrasts with that of its sequel, John Macnab, which is set in the Scottish Highlands.

The Power-House of the title is an international anarchist organization led by a rich Englishman named Andrew Lumley. Its plan to destroy Western civilisation is thwarted by Leithen with the assistance of a burly Labour MP.

"The dominant theme of Buchan's fiction is the fragility of civilisation," it has been said in the context of a discussion of The Power-House. What the critic Christopher Harvie calls "perhaps the most famous line in all Buchan" occurs during the first meeting between Leithen and Lumley, when the latter tells the former, "You think that a wall as solid as the earth separates civilisation from barbarism. I tell you the division is a thread, a sheet of glass" (Chapter 3). Harvie cites a comparable passage from the second volume of The Golden Bough, where Frazer speaks of "a solid layer of savagery beneath the surface of society," which, "unaffected by the superficial changes of religion and culture," is "a standing menace to civilisation. We seem to move on a thin crust which may at any time be rent by the subterranean forces slumbering beneath." - Summary by Wikipedia (3 hr 7 min)

true Buchan. exciting, with charming details of life between the wars in London. Our heros are chaps who have luncheon at the club and gather in the library for whiskey, cigars, and story telling after a shooting party. the narrator is great because he doesn't draw your attention away from the story

Would be 5 star if just a tad more gung ho.Am a big Buchan fan Reader did well...thank you

I love Buchan's store is (his name is said Buckan not Newman) and this was anew one for me. The notion behind this tale seems strangely modern in these equally unsettled times. So maybe Buchan was more alert than he has been given credit for. Apart from getting some pronunciations wrong (Marylebone is always tricky but Belgrave is not) I think the reader did a nice clean job so thanks to him.

Not Buchan's most enthralling work but still interesting. It never bodes well though when the reader starts out by mispronouncing the author's name. The read somewhat sing song but not badly enough so to stop me from listening.

A nicely told story read well. What could be better. Thank you for your reading of this tale