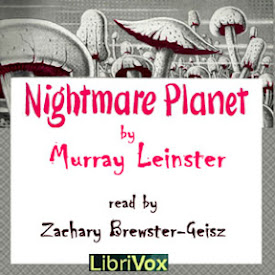 In science-fiction, as in all categories of fiction, there are stories that are so outstanding from the standpoint of characterization, concept, and background development that they remain popular for decades. Two such stories were Murray Leinster's The Mad Planet and Red Dust. Originally published in 1923, they have been reprinted frequently both here and abroad. They are now scheduled for book publication. Especially for this magazine, Murray Leinster has written the final story in the series. It is not necessary to have read the previous stories to enjoy this one. Once again, Burl experiences magnificent adventures against a colorful background, but to the whole the author has added philosophical and psychological observations that give this story a flavor seldom achieved in science-fiction. - Summary by Original magazine blurb from Science Fiction Plus, June 1953 (1 hr 47 min)

This is the third and last story Leinster wrote about this planet with its huge fungi and insects. The reading is excellent and conveys the horror of life on the planet. However, Leinster leaves some very large scientific holes unfilled. First: When the lifeless planet was first discovered, it had an oxygen atmosphere. The planet's geochemistry would have to be very different from Earth's if this were true. Second, fungi are incapable of photosynthesis; so in order for them to survive, most of the planet's flora would have to be green plants. Why are the humans, then, seemingly stuck in the fungus valley? Third, unless the insects had evolved lungs, in order for them to grow as big as they're described here, the atmosphere would have to be at least 50% oxygen; and again, that would indicate a very different geochemistry, and in such a superoxygenated atmosphere, a tiny spark could result in a conflagration, or a lightning strike could cause a huge explosion.

It's a wonderful cap to the series. It's fine as a standalone story. But, if I were you, I would listen to the series in order - - it will be much more meaningful

Very much enjoyed this

Excellent reading by Zachary! I'm left the sad understanding that what was quickly becoming a society of health, prosperity, & happiness will degenerate into one of disease, want, & meaninglessness.

well read , not so well written

Very well read or I think I would have given up before the end. Sorry this one just didn’t work for me.

A worthy end to the trilogy, it had me gripped in the story right to the end. Beautifully read too.

This is just the retelling of the end of the "Forgotten Planet," the reader did a good job.

Basically a masculinity fantasy with a scifi backdrop. Employable, not really great, but ok.

These older SF are a joy to listen to.