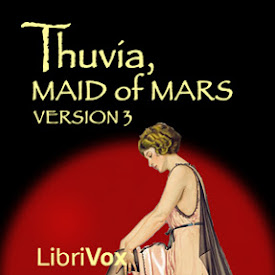 The fourth book of the Barsoom series, Thuvia, Maid of Mars takes up the story of Thuvia, now Princess of Ptarth, and Carthoris, son of John Carter and Dejah Thoris. Thuvia is betrothed to Kulan Tith, Jeddak of Kaol in an arranged marriage. She spurns the advances of a suitor, Astok of Dusar, who then plots to abduct Thuvia, and frame Carthoris for the crime, igniting a war between Kaol, Ptarth and Helium. (Summary by Mark Nelson)

The Hall of Doom

The Battle in the Plain

The 4th in the Barsoom series. Classic ERB delivered by one of the best narrators Mark Nelson. This story follows John Carter's son.

great reading of the 4th book of Mars series

Another great read by Mark Nelson. Even though John Carter doesn't play a major role the story offers everything you could want from a John Carter story. Highly recommended.

I like the idea of the realists. It kept this from being as boilerplate as I thought it was going to be. Great reading as always.

I've read the entire series up to this point and this book is probably the weakest so far. still good though

probably the best narration possible for a story like this one. Lots of fun to listen to!

A decent "side story/sequel" to the John Carter saga. Mark Nelson does an excellent job as usual.

Mark Nelson is perfect for Barsoom. Thuvia is a another hit. Thank you again. Starting Chessmen in 3,2,....