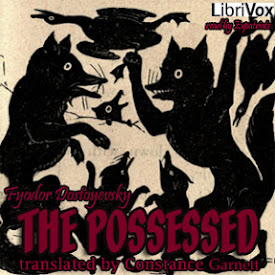 Although titled The Possessed in the initial English translation, Dostoyevsky scholars and later translations favour the titles The Devils or Demons. An extremely political book, Demons is a testimonial of life in Imperial Russia in the late 19th century. As the revolutionary democrats begin to rise in Russia, different ideologies begin to collide. Dostoyevsky casts a critical eye on both the radical idealists, portraying their ideas and ideological foundation as demonic, and the conservative establishment's ineptitude in dealing with those ideas and their social consequences. This form of intellectual conservativism tied to the Slavophile movement of Dostoyevsky's day, called Pochvennichestvo, is seen to have continued on into its modern manifestation in individuals like Aleksandr Solzhenitsyn. Dostoyevsky's novels focus on the idea that utopias and positivist ideas, in being utilitarian, were unrealistic and unobtainable. The book has five primary characters representing different ideologies. By exploring their differing philosophies, Dostoyevsky describes the political chaos seen in 19th century Russia. - Summary by Wikipedia (25 hr 37 min)

It goes without saying that the Possessed or Devils is a great book. Ms. Garnets translation opened the book to English readership and created several attempts to provide translations that are more authentic to Dostoyevsky’s original work and character narratives. These other translations are superior, but original is still superb. The reader does a great job, and I am thankful for his efforts to create an audio book that I, and many like me, can benefit from.

Wonderful reading of this book, so engaging that I felt compelled to listen whenever I had the opportunity, until I finally finished just a week later. Expatriates voice is great - and just detached enough that it allows you to become fully immersed in the words. conveys all the irony perfectly. And you almost forget you are listening to the words and not reading yourself. I would venture to say that he sounds better than the voice in my head could, and does the book justice.

Not Dostoyevsky's best, but not bad either.

I read this book years ago under a different title. I don't remember there being quite so much French, maybe my translator translated some of it. The volunteer reader obviously doesn't speak French, (neither do I), but does struggle through it. the French statements are mostly superfluous and have no real use to the story, I believe that they are there to make the speaker look ridiculous, so it is no big deal, those chapters are just a bit annoying. I very much liked the volunteer's reading of the rest of the book, and would like to thank him, very much, for taking the time to do this one, even though it is not one of Dostoyevsky's most popular titles.

Though the novel is tedious at times, it is well read. Especially in section 3, the action really gets going. Lots Of characters with different names. Over all, it is still very worth listening to. The reader is very well read and doesn't get in the way of the story.

I did not know this book beforehand and think of it as quite a discovery. What a story! And very well read. I really enjoyed it.

This book was harder to follow than Dostoevsky's other books. It does contain some gems that make it worth listening to.

Thank you for reading this important book, wonderfully read. How well you understand the characters is conveyed clearly.

Not the best read quality

Book is listenable , but far from good quality that can be found on Librivox