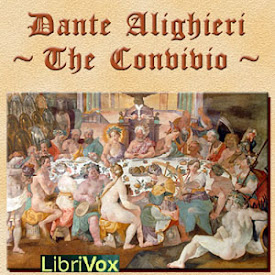 Convivio (The Banquet) is a work written by Dante Alighieri roughly between 1304 and 1307. This unfinished work of Dante consists of four trattati, or "books": a prefatory one, plus three books that each include a canzone (long lyrical poem) and a prose allegorical interpretation or commentary of the poem that goes off in multiple thematic directions.

The Convivio is a kind of vernacular encyclopedia of the knowledge of Dante's time; it touches on many areas of learning, not only philosophy but also politics, linguistics, science, and history. The treatise begins with the prefatory book, or proem, which explains why a book like the Convivio is needed and why Dante is writing it in the vernacular instead of Latin. It is one of Dante's early defenses of the vernacular, expressed in greater detail in his (slightly earlier) linguistic treatise De vulgari eloquentia (On Eloquence in the Vernacular). Books 2 and 3 form a unit, both focusing on Dante's new love after the death of Beatrice—his love for Lady Philosophy, "the most beautiful and dignified daughter of the Emperor of the universe," as he calls her. Book 2 discusses allegory and Lady Philosophy (in connection with the canzone Voi che ’ntendendo il terzo ciel movete [You who move the third heaven with an act of the intellect], which opens the book), and also brings such subjects as astronomy, angelology, and the soul's immortality. Book 3 is a hymn of praise for philosophy, launched by an allegorical interpretation of Dante's great canzone Amor che ne la mente mi ragiona (Love, who speaks to me in my mind). In this book, Dante asserts that true philosophy cannot arise from any ulterior motives, such as prestige or money—it is only possible when the seeker has a love of wisdom for its own sake. Book 4 is by far the longest of the Convivio, and is noticeably distinct from the two books that precede it. The subject of book 4 is the nature of nobility. It opens with the longest canzone of the Convivio, Le dolci rime d’amor (Those sweet poems of love), which is explicitly about gentilezza or nobility, as well as a condemnation of avarice, asserting that reason and the spirit of acquisition are mutually incompatible. The first half of book 4's thirty chapters are dedicated to debunking the false idea of nobility as an inherited trait, one restricted to the aristocracy, while the final fifteen chapters delineate what true nobility consists of—the perfection of a thing according to its nature—and how nobility manifests in people at various stages of life. The Convivio, in its autobiographical passages and in the trajectories of its lines of thought, gives us a rich portrait of Dante himself, of great importance for an understanding of his work as a whole, especially the Divine Comedy. - Summary by Wikipedia (9 hr 15 min)