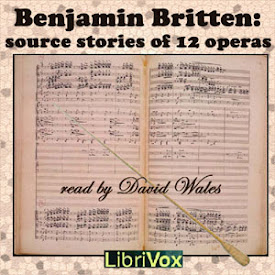 Britten's operas are firmly established in the international repertoire: according to Operabase, they are performed worldwide more than those of any other composer born in the 20th century, and only Puccini and Richard Strauss come ahead of him if the list is extended to all operas composed after 1900. Britten went to various sources for his stories from the Bible to Japanese noh plays. This is a collection of twelve of the source stories. All but one are the original texts; the one exception is A Midsummer Night’s Dream which the reader took from Charles Lamb’s telling of the story. Some operas are omitted because no public domain texts could be found for their sources. Summary by Wikipedia and David Wales (13 hr 14 min)

Part 1 The Little Sweep. William Blake, The Chimney Sweeper in Songs Of Innoce…