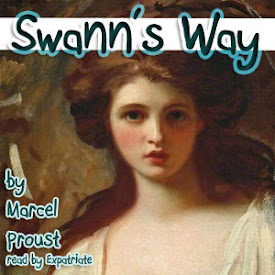 "Swann's Way" is the first of the seven parts of Marcel Proust's great autobiographical novel "In Search of Lost Time." From the very first page the reader is drawn into the many facets of memory, memory as prompted by all the human senses. "Swann's Way (Du côté de chez Swann, sometimes translated as The Way by Swann's) (1913) was rejected by a number of publishers, including Fasquelle, Ollendorff, and the Nouvelle Revue Française (NRF). André Gide was famously given the manuscript to read to advise NRF on publication, and leafing through the seemingly endless collection of memories and philosophizing or melancholic episodes, came across a few minor syntactic errors, which made him decide to turn the work down in his audit. Proust eventually arranged with the publisher Grasset to pay the cost of publication himself. When published it was advertised as the first of a three-volume novel (Bouillaguet and Rogers, 316-7). Du côté de chez Swann is divided into four parts: "Combray I" (sometimes referred to in English as the "Overture"), "Combray II," "Un Amour de Swann," and "Noms de pays: le nom." ('Names of places: the name'). A third-person novella within Du côté de chez Swann, "Un Amour de Swann" is sometimes published as a volume by itself. As it forms the self-contained story of Charles Swann's love affair with Odette de Crécy and is relatively short, it is generally considered a good introduction to the work and is often a set text in French schools. "Combray I" is also similarly excerpted; it ends with the famous madeleine cake episode, introducing the theme of involuntary memory. In early 1914, André Gide, who had been involved in NRF's rejection of the book, wrote to Proust to apologize and to offer congratulations on the novel. "For several days I have been unable to put your book down.... The rejection of this book will remain the most serious mistake ever made by the NRF and, since I bear the shame of being very much responsible for it, one of the most stinging and remorseful regrets of my life." - Summary by Wikipedia (edited by Expatriate) (19 hr 2 min)

This book is rated amongst the best ever for good reason. It is dreamy and musing and enters into the mind and inner world like nothing I've read. It goes deeply into the realm of memory as well. It is entrancing and poetic and beautiful. Thank you for this reading.

I love the long sentences that can be read in one long breath.