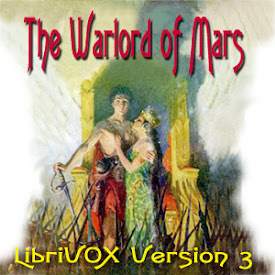 The Warlord of Mars (version 3)

After the horrendous battle at the end of the previous book, which ended with the destruction of the religion of Issus, John Carter's wife and two other women were locked in a slowly rotating prison attached to the Temple of the Sun, each of whose hundreds of cells are only open to the outside world once every year. In the meantime, Carter's friend Xodar has become the new Jeddak (chief or king) of the black Martian First Born, and those white Martian therns who reject the old religion likewise gain a new unnamed leader, but there are still some who wish to keep the old discredited religion going, including the therns' erstwhite leader, the Holy Hekkador Matai Shang. John Carter discovers that a First Born named Thurid knows the secret of the Temple of the Sun and he and Matai Shang want to rescue the Holy Thern's daughter Phaidor, who has been imprisoned with Dejah Thoris and another Barsoomian princess, Thuvia of Ptarth, in the Temple jail for several hundred days. Unfortunately, Thurid, to spite Carter, gets Matai Shang to also take Dejah Thoris and Thuvia along with them. Carter follows them in the hope of liberating his beloved wife. - Summary by Wikipedia (5 hr 42 min)

08 - Through the Carrion Caves

Better than any paid version

Mark Nelson’s narration is out of this world. It’s perfect for John Carter and all of ERB’s novels. I love Barsoom and all its mysteries and adventure. I always feel close to my father when I listen to them. Thank you LibriVox.

Great reading of a classic.

This is the third John Carter of Mars book and it really ties the whole story together. Sure it's pulp sci-if with no actual sci, but it's great fun. The reader is top notch. I'm not sure how many other versions there are (this is titled version 3) but you would be hard pressed to find a better reader of the story.

Mark Nelson does this third Mars book justice with his strong, deep, steady voice. Through astounding danger and hairbreadth escapes, we follow John Carter on his quest to rescue his princess, the incomparable Deja Thoris, from the clutches of evil black and white Martians.

Another great story by E. R. B.

I never thought I would read, even less enjoy, this series by Burrows, but it has become one of my favorites by the author. Mark Nelson does a splendid job reading as usual, thank you sir for your hard work!

have listened to all three in the series so far, and am escaping the day to day in the most wonderful way. absolutely worth the time and there are a few versions with different readers so there is bound to be one youll like.

The 3rd in the Barsoom series. Continues to follow John Carter and his adventures on Mars. Classic ERB delivered by one of the best narrators, Mark Nelson. Thank you Mr. Nelson

Way too much violence. Totally awesome . look for Thuvia Maid of Mars and The chess men of mars

excellent...perhaps a bit more drawn out than necessary but an enthralling story nonetheless.