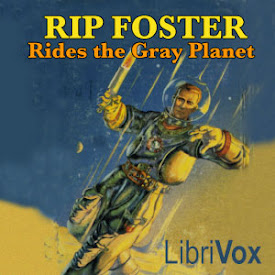 "Foster, Lieutenant, R. I. P.," blared the voice horn, and five minutes later Rip Foster was off into space on an assignment more exciting than any he had ever imagined. He could hardly believe his ears. Could a green young Planeteer, just through his training, possibly carry out orders like these? Sunny space, what a trick it would be! From the moment Rip boards the space ship Scorpius there is a thrill a minute. He and his nine daring Planeteers must cope with the merciless hazing of the spacemen commanding the ship, and they must outwit the desperate Connies, who threaten to plunge all of space into war. There are a thousand dangers to be faced in high vacuum—and all of this while carrying out an assignment that will take every reader's breath away. - Summary by Original book cover (5 hr 38 min)

Chapter Ten - Get the Scorpion!

Chapter Seventeen - The Archer and the Eagle

Chapter Twenty - On the Platform

I've come to expect nothing less from Mark Nelson's narrations than excellence, his narrating is all that it takes to hook me. That being said this was a fantastic story which honestly, to me anyway, rarely shows its age. Common phrases such as "bursting ones bubble" or "by jiminy" are twisted beautifully to fit the space faring theme and were a quite unexpected happy surprise. Recommended to anyone who enjoys sci-fi, space or action stories.

Once again Mark Nelson excels in adding his talented interpretive reading and clever use of accents to a good story.

Good old timey sci-fi fun read by a great narrator. The story might be from the 60s even, buggy there are no women or blacks in it and it's a very military oriented take, sterile politics other than their absence and the multicultural crew and the "Connie's" enemy. I must have dosed when their roots were explained. it's also agnostic, no religious treatments. Good 50s or early 60s pulp sci-fi, a fine example.

I was a little hesitant of listening to this story thinking it might be a little too "hokey" because of the impression given by it's title/cover. I could not have been more wrong. Of course it's classic sci-fi of that time period, but it's written very well, and it's read by one of the best readers at LibriVox. The incomperable Mark Nelson. Very entertaining.

I couldn't stop laughing at the "Connies" references, and while Mark Nelson 's readings are always superb I found some of his accents maybe missed the mark a little in this tale But, its well read, brought beautifully to life, and its an uncomplicated tale of good guys and bad guys and the best kind of escapism

Fun story made even better with Mark's reading. I deliver pizzas and listen to Mr Nelson while I'm on the road. At night he reads me to sleep. Love his use of accents and he's not just calling words off the page, but verbally acting out the story. Thank you, Mark.

I typically shy away from books that use military terminology sincere have little to no knowledge on such. However, the authors kept such diction to a minimum; those which were used were defined from the onset of the narration. Overall awesome piece of fiction!

What a ride. may be too much fun for an adult but boy did I ever enjoy it. Can't say it enough but Thank You Mark for a fantastic narration. You have brought me a lot of entertainment. Peter T.