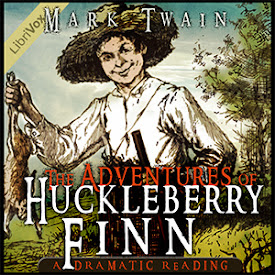 In order to escape his cruel father, and led by a thirst for adventure, Huck Finn sets off down the Mississippi River with Jim, an escaped slave. But trouble is never far behind them, and their adventures are only beginning when they meet up with two men who claim to be a duke and a king! And that’s before Jim gets captured by none other than Tom Sawyer’s aunt and uncle… who mistake Huck for Tom. The hilarious adventures and scrapes of Huck, Jim, Tom, and others are brought to life in this dramatic reading. - Summary by Rachel
Cast
Huckleberry Finn: Patrick Saville
Tom Sawyer: Ashur Gharavi
Jim: Oxenhandler
The Duke of Bridgewater: Edward Kirkby
The King: Zames Curran
Uncle Silas: Evan Zeiger
Aunt Sally: Kristin Gjerløw
Various other roles read by: Zames Curran, KHand, Ashur Gharavi, John Burlinson, K. Adrian Stroet, Donald Cummings, Willy, Larry Wilson, Joseph Tabler, Soumen Barua, Rachel, Twinkle, Availle
Edited by: linny
Proof listeners: Donald Cummings, Rachel, Nadiezda, Tawnya Roy, Zames Curran
(11 hr 54 min)

Good, with a few issues

Audio recording and sound quality issues prevent this from being great. Otherwise, a decent read.

Classic book read Well. I had a great time listening to it. Higly recommended!

Sadly I was a little disappointed in this book. First of all, the readers do a commendable job, and I liked the southern accents which help a lot with the important immersion into the time and place of the story. But I just found the book rather boring - lacking much of the childish charm and humor of "The Adventures of Tom Sawyer". Tom is just also a much more charismatic character than Huck, and incidentally this book too gets a lot more entertaining when Tom comes in at the end. Most difficult of all though is of course the the ever present heavy racial slurs, abuse and stereotypes. And I can imagine it was a very emotinally difficult book for all the readers to record. It is very much a product of its time, and definitely not suitable for children without adult supervision to provide context and guidance.