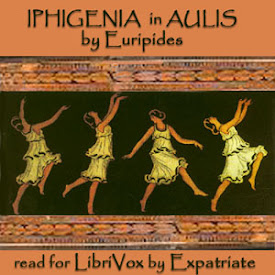 Iphigenia in Aulis (Ancient Greek: Ἰφιγένεια ἐν Αὐλίδι) is the last extant work of the playwright Euripides. Written between 408, after the Oresteia, and 406 BC, the year of Euripides' death, the play was first produced the following year in a trilogy with The Bacchae and Alcmaeon in Corinth by his son or nephew, Euripides the Younger, and won the first place at the Athenian city Dionysia. The play revolves around Agamemnon, the leader of the Greek coalition before and during the Trojan War, and his decision to sacrifice his daughter, Iphigenia, to appease the goddess Artemis and allow his troops to set sail to preserve their honour in battle against Troy. The conflict between Agamemnon and Achilles over the fate of the young woman presages a similar conflict between the two at the beginning of the Iliad. In his depiction of the experiences of the main characters, Euripides frequently uses tragic irony for dramatic effect. This verse translation is by Arthur Sanders Way, a classical scholar, translator and headmaster of Wesley College, Melbourne, Australia. - Summary by Wikipedia (edited by Expatriate) (1 hr 44 min)

as well as can be done by one person