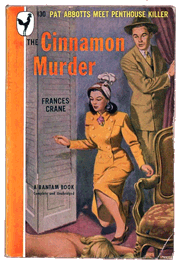 Adventures of the Abbotts 18 Eps

(18 Episodes - AFRTS 1957) "Adventures of the Abbotts" The Abbott Mysteries (1945-1947): The Abbott Mysteries were the 1st radio appearance of Frances Crane's detective 'team' of Pat and Jean Abbott, with Julie Stevens & Chuck Webster in 1945, Les Tremayne & Alice Reinheart in 1946, ending with Julie Stevens & Chuck Webster in 1947 in the starring roles. The Return of The Abbotts: The series premiered over NBC on Sunday, October 03, 1954, with Don Briggs as Pat Abbott and Claudia Morgan as Jean Abbott. Claudia Morgan had previously starred as Nora Charles in The Adventures of The Thin Man. Beginning in 1955, Claudia Morgan (as Jean Abbott) starred with Les Damon (as Pat Abbott), in "The Adventures of The Abbotts." Damon departed the series after 13 episodes, to be replaced by Mandel Kramer. * Source: Digital Deli OTR * def gp ddh

I began listening with interest but soon the two characters mainly the wife became irritating. Her constant questioning and dialogue just took away from the plot. Many female characters in these days were badly written with insulting scripts. This is an excellent example. The writers constantly writer her as jealous and insecure. Mr. and Mrs. North is a much better program.

Amusing series but fell down on new debuts like shirly (Shelley ) Britton (? sp.) debuting as Kathy Blake who is then announced as Kathy Dexter in the Emerald necklace. All these women actresses have hoarse throaty voices at low pitches so I guess that was considered sexy at that time.

Abbotts versus the Charles series

This is a series that compares with the THIN MAN radio series, with Les Damon. Sadly, the bright writing and lighter note of the Thin Man shows are lacking here. I recommend Thin Man and give this one only two stars.

Thanks for posting these. Decent sound and interesting, if not entirely surprising, plots. I'd recommend a listen