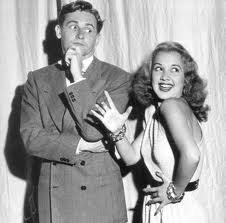 (51 Episodes) "The Alan Young Show" was a 30 minute situation comedy that ran from 1944 thru 1949. In 1944, Canadian actor Alan Young was hired away from the Canadian Broadcasting Company (CBC) radio, by NBC Radio, as a summer replacement for "The Eddie Cantor Show.' Young switched to ABC in late '44, (October 03 1944 - June 28 1946), eventually returning to NBC in the fall of '46 Sept. 20, 1946-July 05, 1949) to complete "The Alan Young Show" program run. Alan Young is probably best remembered for his 1961-1966 Television role, playing Wilbur Post, second fiddle to a talking horse named "Mr. Ed." ** I originally followed the dates from Jerry Haendiges Vintage Radio Site, (www.otrsite.com) but after listening to each episode, I have discovered the dates are totally out of wack! As noted in the Description Section of Properties, episodes marked as being form the first year of AYS with ABC, are actually from shows from the first year with NBC Blue Network, when his show was the summer replacement show for Eddie Cantor. I will continue to try to repair this Alan Young file!! OTR * def gp ddh

This show is an absolute joy! Alan is a very endearing character who most people will remember in the 60s TV Sit-com MR ED as Wilbur Post, owner of the famous talking Palomino Horse. The show starts off a little unsure of itself but soon progresses into a real more-ish party-atmosphere bonanza. Fans (like myself) of the hilarous Colgate Toothpowder Sponsered Mel Blanc Show will get a kick out of hearing this - as it is unashamedly and unmistakably the show which inspired it. Alan is pretty much the same character as Mel plays - a non-worldly wise, pretty dumb but very likeable young fella who has a girlfriend called Betty (even the name is the same in Mel Blanc's show!) who's dad dislikes him (same again). Even some of the characters are the same - Hubert Updike is an hilarious comedy rich-brit with extremely funny pronunciation and full of self praise - practically identical (even in voice) to the equally hilarious Hartley Benson in The Mel Blanc Show. Also, quite astonishingly, Alan is still alive and well (as of 10th April 2013), bless his heart! I have had hours of fun laughing out loud to this show, and generally the sound is fabulous (occasionally of lesser quality when AFRS broadcasts are used). Don't miss it if you like things like Fibber McGee & Molly, Duffy's Tavern and The Mel Blanc Show.

ABC was created out of the anti-trust lawsuits established by Mutual against originally CBS & NBC...and the involvement of the FCC and subsequently the U.S.Supreme Court. You could be correct about some of the 1944 Alan Young shows were from the Summer replacement series for Eddie Cantor. But only 13 weeks worth. And even then, there are a great many number of Gaps in those early shows. I would have to say that the majority or balance of the AY Shows were from when Mr.Young had his own show on ABC. ABC officially became a full fledged Network in June 1943, when the owner of Life Savers candies bought the Blue network for 7.8 Million bucks.

One of the Best

A VERY under-appreciated and lesser-known comedy show from the Golden Age of Radio. I absolutely love this collection. Young was hilarious, and the writing for this show was top-notch. Very good quality recordings no less - I have listened to every episode available multiple times, and never get tired of them.

a tale of two shows

It wasn't a classic, but quite enjoyable as a comedy with Betty as the girlfriend. Replacing her with the self-centered, abrasive Delores was not at all funny.