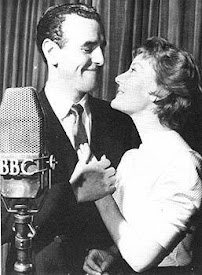 (34 Episodes) "A Life of Bliss," a BBC Sitcom and a new radio sitcom, was introduced by the BBC on the 29th of July, 1953, starring George Cole as awkward, absent-minded bachelor David Bliss. In the early episodes, Nora Swinburne played his sister, Pamela Batten & Esmond Knight his brother-in-law, Robert Batten. Later on, these roles were absorbed by Diana Churchill & Colin Gordon The writer of the series, Geoffrey Harrison, was often late in the completion of his scripts, to the extent that he would still be typing them at the recording sessions, while Percy Edwards (the "bark" of 'Psyche,' the dog in the series) entertained the studio audience with his animal impressions. This series ran for 118 episodes before it moved (in the early 60s) to television at which time, castmate Petula Clark went to musical super-stardom! * Source: Wikipedia OTR * def gp ddh

The stories and dialog are very neatly contrived; the actors are among the best. This is classic English post-war comedy.

Wonderful show! Top-notch actors and clever situations. It takes listening to a few episodes to get a sense of the characters.

Quality comedy in the everyday events of life, it has me laughing in surprise! Charming and light.