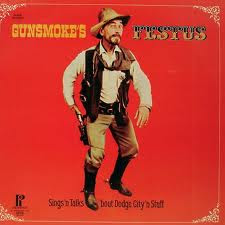 Festus Talks About - His Grandpa Hawg

Festus Talks About - His Home Town My

Festus Talks About - His Trip To Las Vegas

Festus Talks About - Mules (You're Nothing)

Festus Talks About - Writes To His Girl (Phooey On)

Kind of reminds me of the comedy records Andy Griffith put out in the '60s while he was playing the sheriff of Mayberry on TV. Gentler humor from a gentler age. Just a little correction: Parley Baer did not play Festus Hagan in the radio version of Gunsmoke. He played Chester Proudfoot, who was played on the TV version by Dennis Weaver. Curtis' character, Festus first appeared on the TV show in 1959 and replaced Chester as Matt Dillon's deputy when Weaver left the show in 1964. Curtis remained on Gunsmoke as Festus until it ended its 20-year run in 1975. Ironically, Parley Baer's voice, to my ears at least, sounds a bit more like that of Ken Curtis than it does that of Dennis Weaver.

Ken Curtis played Festus on TV's Gunsmoke. Ken was a singer with a Dorsey band. He also was a director and producer. This set of recordings was a record and not a radio show and is archived incorrectly but what does it matter as it is well worth listing to for its artistic merit.

Well, it sure ain't Festus from Gunsmoke (Parley Baer). It's a mediocre impersonator. This series is full of anachronisms, bad jokes, and sad stereotypes. Beyond that, it's silly and fun.

I could listen to Festus all day. He was a very memeralle charactor.

it was funny, a good listen.