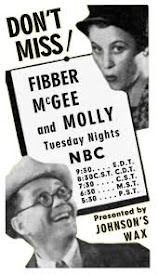 (63 Episodes) "The Fibber McGee & Molly Show," one of the longest-running radio sitcoms, premiered on NBC Radio Network in 1935, remaining popular until its demise in 1959, long after radio had ceased to be the dominant form of American household entertainment. * SYNOPSIS: Much of the show's humor relied on recurring gags, unseen regulars & punchlines that popped up here & there for its many broadcast years. ** THE McGEE'S HALL CLOSET **: One of the running FM&M jokes was about the McGee's hall closet. For example, "Fibber Snoops For Presents In Closet." Another closet storyline was the episode named "Hall Closet." These are just two of the many FM&M episodes which brought up mention of Fibber's messy hallway closet.* * SPONSOR: In a style not unusual for the classic radio years, the program would usually open the 29-and-a-half minute broadcast with the audience in full laughter, as Harlow Wilcox announced: "The Johnson Wax Program with Fibber McGee and Molly!" Wilcox's intro pitch lines usually were met with groans or humorously sarcastic lines by Fibber. During the many years that the show was sponsored by Johnson Wax, Fibber nicknamed Wilcox "Waxy," due to Wilcox's constant praises of their various products. Each episode also featured a mid-show appearance by announcer, Harlow Wilcox, whose job it was to weave the second ad for the sponsor into the plot without having to break the show for a real commercial. * JIM & MARIAN JORDAN: The stars of the program, natives of Peoria, Illinois, were real-life husband James "Jim" Jordan (Nov 16 1896 - April 1 1988) and wife, Marian Driscoll (April 15 1898 - April 7 1961). Jordan was the 7th of 8 children born to James Edward Jordan and Mary (nee Tighe) Jordan while Driscoll was the 7th & final child born to Daniel P. and Anna (nee Carroll) Driscoll. Both Jim & Marian attended the same Catholic Church, where they met, and married in 1918. They had two children, both born in Peoria, Kathryn Therese Jordan (1920-2007) & James Carroll Jordan (1923-1998). * Source: Wikipedia OTR * def gp ddh

'Fibber goes to night school': wonderfully wacky! the cast is in fine form, even Johnson Wax pitchman Harlow Wilcox, who Fibber dubs 'Waxy' . Great malaprops, a clever song in act 2, and a trip to THE closet, which is even opened ! (If you are fortunate enough to be just discovering this show, the closet was used very sparingly to tease the wildly popular show's fans. It might be only mentioned; or Fibber begins to open it and is distracted = no closet. The longer the sound of things crashing out IF he does open it, the happier the fans! This was so popular it has become an expression you may have used yourself-- even if you were born decades after the show went off the air: 'Fibber McGee's closet'.)

Fibber McGee I did not discover the show until relatively recent- even tho' I listen to a LOT of otr programs- not sure why I didn't listen to them earlier, but I adore them. Sure wish I had grown up during the era these were aired on radio. What a wonderful time, and what great, really hilarious skits & jokes! I am no where near old enough to "remember OTR" but these are gold.

A few errors in dates.

I had to listen to the series a couple of times before I was sure but, for at least part of the first season, Harlow Wilcox introduced himself as "Harlow, call me 'Harpo' Wilcox. I imagine conflict with the popular Marx Brother of that name resulting in the new, and certainly more apt, nickname "Waxy".

Good to have the '30s in one place

The Fibber '30s clips have been absent from Archive for a long time. One tech note: the clip labeled 1935-07-22 #0015 The Baseball Instructor is actually from 1942. It's really this episode: 420421_Out_To_The_Ballgame.mp3 though it may not be the same physical recording.

Someone should check dates. Gildys first appearance was 10-03-39. Earlier shows dated here have his name in title. If he wasn't yet on the show show,how could that happen?

Fibber McGee & Molly is my all time favorite show, especially the pre-war years.