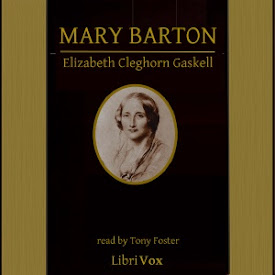 "Mary Barton: A Tale of Manchester Life" was Mrs Gaskell's first full-length novel. It was published anonymously in that tumultuous year of political change, 1848 - only a few months after the Communist Manifesto co-authored by her fellow Manchester-resident, Friedrich Engels. Engels's experience as agent in his father's cotton-spinning factory motivated him to write "The Condition of the Working Class in England", a classic account of the sufferings of the poor under the factory-system.

Elizabeth Gaskell's own personal contact with the plight of the poor cotton workers of Lancashire also compelled her to a compassionate examination of their lives; but as a middle-class woman, married to a Unitarian minister, her approach to her subject took on a more emotionally complex significance; influenced by religious faith but also by more personal considerations.

In the brief preface to the novel, Mrs Gaskell hints at her initial impulse. The loss of a beloved child in infancy led her to seek a therapeutic outlet, but one which left her uncertain of her capacity to contextualize her public, writerly response to the tragedies occurring in the surrounding society of Manchester's poorest classes: "I know nothing of Political Economy, or the theories of trade..." She was, however, determined to portray, in novelistic form, the intimate connection between the private experience of her characters and the social forces of her time. The success of the novel led her to proclaim her authorship and move on to further works of fiction, which have secured her in our times a mounting reputation as one of the leading novelists of the mid-Victorian period.

Certainly the novel features numerous death-scenes, all conveyed with a depth of sympathy that contrasts with the queasy iambics with which Dickens orchestrated the notorious demise of Little Nell. Mrs Gaskell was not, like Dickens, a London-based novelist observing the sufferings of the provincial poor with a journalistic detachment - as evidenced in his own admirable, Lancashire-based novel "Hard Times". Gaskell lived among the people whose attenuated lives she chronicled - and however hesitantly, as a début novelist, she rendered their experience in literary terms, her writing presents us with a true insight into the sufferings of individuals at a point in history when the mass of human beings fell casualty to the forms of economic progress following upon the Industrial Revolution. Most impressively she called into question the political and social cost of creating a resentful proletariat despairing of survival in (to quote Karl Marx) a "heartless world".

Our reader Tony Foster is a resident of Manchester and a near-neighbour of Mrs Gaskell (allowing for their separation in time). His superb narration renders the native speech of her characters with an authenticity which ideally conveys the spirit of this book. A truly moving experience awaits everyone who gives ear to this 'Tale of Manchester Life'. (Summary by Martin Geeson) (15 hr 40 min)

CHAPTER I - A MYSTERIOUS DISAPPEARANCE

CHAPTER V - THE MILL ON FIRE--JEM WILSON TO THE RESCUE

CHAPTER X - RETURN OF THE PRODIGAL

CHAPTER XV - A VIOLENT MEETING BETWEEN THE RIVALS

CHAPTER XXIV - WITH THE DYING

CHAPTER XXVI - THE JOURNEY TO LIVERPOOL

CHAPTER XXVII - IN THE LIVERPOOL DOCKS

CHAPTER XXXV - ''FORGIVE US OUR TRESPASSES.''

This Reader Could Go Pro

My favorite Librivox reader-- expressive, clear, sensitive to a variety of accents and dialects. And it's a good, moving story too!

Definitely a FIVE star story with a FIVE star reader! In my journal and in my heart this goes down as a remarkably beautiful tale! Loved it! Yes, there's sorrow and pain, but hope as well, and an underlying thread in redemption, forgiveness, and the goodness of pure love. It's a poignant love story I will remember for a long time, and a book I'd like to own and perhaps even underline here and there. Be sure to listen for the wonderful poems at the beginning of each chapter, and I heartily recommend having a good, quiet place to listen to the end, uninterrupted. (Bravo, gentle reader! Bravo! I'm off to search for other books you've read! Thank you VERY much!)

Tony Foster delivers another 'Gold Medal' worthy narration and characterization in this 19th century tragedy. Mr. Foster's Manchester dialect is authentic as are his other northern western English ones. His smooth and versatile voice and acting ability is mesmerizing. Elizabeth Gaskell's novel informs the listener of the frailty and cruelty of a life lived as a working class person not only in Victorian England, but in the all societies both past and present where the imbalance of wealth and power is the cause of so much suffering for the majority of its people.

I think Gaskell a much better writer than Dickens, and her stories seem much more real. She had courage in examining social issues and creates characters that feel like real people, not melodramatic cartoons. The reader is extraordinary! I so loved his Manchester and Liverpool and Lancashire accents I have found myself imitating them more than once! thank you! Thank you!

Tony Foster is a fine reader and narrator

This is a fine story about individuals, family, community, society and the pressures of the aforementioned by laissez faire capitalism. Also it is a wonderful story about the everyday life again of the aforementioned . Elizabeth Cleghorn Gaskell was of similar interests and compassion for "the unwanted", the poor, the workers, and such like to Charles Dickens . Dickens books and talks did affect the parliament to make some reforms . But it was Prime Minister Gladstone, circa 1880 who was one of those who started the Liberal party which compete with the Whigs and Tories , who really made concrete the first reforms in law for government's responsibility for helping make life more liveable for "the unwanted" etc . There is much to applaud for personal giving and private organization charity . But only government can make laws for better pay, a humane work week and day, ie the material necessities for a better standard of life of those at the bottom and up to the lower middle class .

A beautiful novel set in the Industrial town of Manchester in the 1840's. Elizabeth Gaskell describes living conditions and the daily sufferings of life for the poor, and intertwines the hard facts with a plot that is enduring. Themes of grace, love, friendship and the value of endurance through suffering abound. Though it is a love story there is a lot more to it and it is a touching story. The harsh reality of poverty is just as real as today. The reading is excellent with a delightful English accent, which keeps the listener fully engaged in the tale. A blessing to see beautiful old literature kept alive in this manner.

This story deeply touched me

There was so much sorrow in the early part of the book that it was hard to keep going, but I'm so glad I did. There are deep life lessons to be gleaned from this book. There are several themes,, but one is how to cope with sorrow. It was also an exciting story and left me satisfied. Please, Tony, if you see this, consider doing more of Gaskell's works. You are the most ideal reader in the way you do both dialects and emotions. Thank you for this!

A well read story which, while entertaining, has much that modern society can learn about industrial relations. I f we could learn the lessons from the previous age, then perhaps the post-Covid economies will transition into the information age more justly. Gaskel must have been one of the best minds of her generation. Many thanks to both reader and LibriVox for sharing her wisdom in such an enjoyable story that one almost doesn't notice that one is growing as a person upon listening.