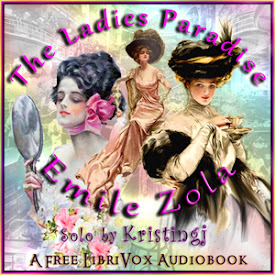 Zola's original French publication, Au Bonheur des Dames ("The Ladies' Delight"), published 1882, is the eleventh novel in his Rougon-Macquart series. This English translation by Ernest Alfred Vizetelly, was published in 1886. It's a glitzy, fast paced Parisian drama depicting life at the world's first department store, revealing its many innovative marketing concepts, fashion, glamour, lust, greed, courage, deception, human foibles, and the vision and financial risk-taking that led to a world transformation in shopping -- one that set all the little shop keepers on their heads. All this is contrasted by our heroine Denise, a young sales woman who struggles through financial hardship, back-stabbing friendships, and incredible temptations with a quiet courage that helps her rise to the top. As she passes through fire and emerges from it unscathed, we get Zola's masterful depiction of social upheaval and feminine resistance to evil. In 2012 the BBC used the novel as the basis for an eight-part television series set in northern England titled The Paradise. A second season followed in 2013. The novel was also was adapted into a play, The Ladies' Delight, for BBC Radio 4, premiering in September 2010. ~ Solo by Kristinjg, Edited by Michele Fry, Summary by Michele Fry (16 hr 11 min)

I really enjoyed this book, whose themes of change, power relationships, materialism, shopping addiction, toxic gossip, poverty and wealth are so relevant today. Initially, I found the narration a little to fast, but it slowed down and I think the narrator did a magnificent job.

Kristin Gjerløw is a superb reader

It sounds like she's almost out of breath after every sentence. She reads it so fast that I can't really get the feeling of the story.

You are a gifted narrator, read more books please Kristeng!