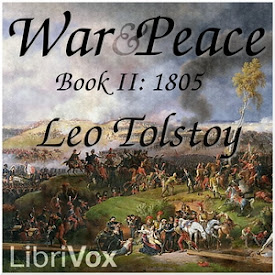 War and Peace (Russian: Война и мир, Voyna i mir; in original orthography: Война и миръ, Voyna i mir") is an epic novel by Leo Tolstoy, first published from 1865 to 1869 in Russki Vestnik, which tells the story of Russian society during the Napoleonic Era. It is usually described as one of Tolstoy's two major masterpieces (the other being Anna Karenina) as well as one of the world's greatest novels.
War and Peace offered a new kind of fiction, with a great many characters caught up in a plot that covered nothing less than the grand subjects indicated by the title, combined with the equally large topics of youth, age and marriage. While today it is considered a novel, it broke so many novelistic conventions of its day that many critics of Tolstoy's time did not consider it as such. Tolstoy himself considered Anna Karenina (1878) to be his first attempt at a novel in the European sense. (Summary by Wikipedia)
Note: The novel is split up in 15 books. This is the recording of book two, which covers events in the year 1805. The recording of the next book can be found here. The recording of book one can be found here. (4 hr 31 min)

Aa wonderful story well read for the most part

Appreciate all the readers' efforts; thank you

The recordings are excellent. The readers have done an awesome job add emotion as needed.

great book. too many readers. some of them not so skillful