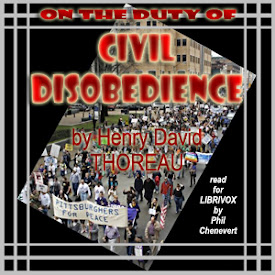 On the Duty of Civil Disobedience (Version 3)

"That government is best which governs least" is the famous opening line of this essay. The slavery crisis inflamed New England in the 1840s and 1850s. The environment became especially tense after the Fugitive Slave Act of 1850. A lifelong abolitionist, Thoreau delivered an impassioned speech which would later become Civil Disobedience in 1848, just months after leaving Walden Pond. The speech dealt with slavery, but at the same time excoriated American imperialism, particularly the Mexican–American War. Thoreau asserts that because governments are typically more harmful than helpful, they therefore cannot be justified. Democracy is no cure for this, as majorities simply by virtue of being majorities do not also gain the virtues of wisdom and justice. The judgment of an individual's conscience is not necessarily inferior to the decisions of a political body or majority, and so "[i]t is not desirable to cultivate a respect for the law, so much as for the right. The only obligation which I have a right to assume is to do at any time what I think right.... Law never made men a whit more just; and, by means of their respect for it, even the well-disposed are daily made the agents of injustice." He adds, "I cannot for an instant recognize as my government [that] which is the slave's government also." from Wikipedia (1 hr 7 min)

I would like to offer the following, for any who so desire to realize and contemplate, the knowledge of which remains unkown by a majority of the American people, no matter its vast import regarding history, ethics, oppression, and the American Institution of Slavery. The state of Vermont, formerly an indepent Republic, i.e. a country existing independently of, and in armed conflict with both “pre-uprising v British rule America” and “post-uprising v British rule America”, whose people, despite already having independence from what would become tyannical Americian rule, were the first to actually take any action in the “Revolutionary War” (though I see nothing revolutionary about a war which led to Institutional Slavery, enshrined as distinctly American by the wealthy plantation-owning so-called “Founding Fathers” ). The Vermont fighters were also the most effective guerilla fighters aiding the colonies’ uprising. Then the true colors of America came to the forefront when its Government issued a mass arrest warrant for all Slaves fortunate enough to escape their captivity, a warrant which applied to even those states not of formal slave-owning status, “the North” in the coming civil war. Everyone, not only “the Law”, was required by law to turn in all asylum-seekers believing “the North” to be a safe haven. This effectively produced, and enforced, the very first posse comitatus law, i.e. government-imposed, self-enforced, martial law. *The State of Vermont* was the *only* state to openly defy the U.S. Government, proudly refusing to comply with the “Fugitive Slave Act” (what a prelude that “Act” was in what would be the regular practice of Orwellian-style naming of American Laws by all its “branches”). In effect, Vermont held up a sign welcoming those escaping slavery and telling the relative might of the U.S. Government to “go ahead and try to see what we think of you”. On another note, I think Phil’s description and reading of this work by American Anarchist David Thoreau to are excellent. Thank-you.