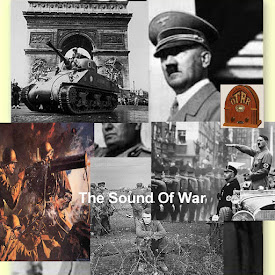 The Sound of War - Single Episodes

THE SOUND OF WAR

The Sound of War is an 18 episode collection. Jay Hickerson's "The Ultimate Guide to all Circulating Shows" states that this is how many were produced. The series used the tagline "The Actual Sound Record of World War II. A drama preserved for all time through the medium of radio. An era not to be forgotten." The Sound of War contains many sound clips, some rare from such notable figures as Adolf Hitler, Franklin Roosevelt, Winston Churchill, Benito Mussolini, Neville Chamberlin, General Douglas McArthur, Charles DeGaulle, Hermann Goering, and many more. It's not clear when the show was broadcast but they appear to be from the late 1950s or early 1960s. There are three episodes that are all labeled "The Fall of France" but they are indeed unique to each other. The producers seemed to place an emphasis on this period for some unknown reason. The shows were produced by Bud Greenspan and narrated by his brother David Greenspan, also known as David Perry. The two went on to produce many film sports documentaries largely about the Olympics. From the Old Time Radio Researchers Group. See "Note" Section below for more information on the OTRR.

Sound of War xx-xx-xx (10) The Battle Of Britain

Sound of War xx-xx-xx (12) The Philippine Islands - Their Death, Their Life

I urge anyone who has not heard this to listen. A dark time in our history, may it never be repeated.

listening to this and the radio news from the war years gives a much fuller picture of the people involved. I have learned to love FDR for the man of vision he was. Winston Churchill as the tower of power he was for all the Allied Forces. Yes and even Neville Chamberlain for man of peace that never wanted his people to suffer the horrors of WW1 again. Very much worth the time. Thank you for posting this.

Glad I had a chance to hear what people heard on radio back in the days of WW2! Would help if it was organized in orser history happened, instead there is a lot of jumping around timetable.

This is a very interesting set of shows. Some times the narrator sounds like a Ronald Reagan, especially on the intros, but I don't think is is him. I love this series.

very good overall. This kind of living history is a great tool

Awesome for a WWII fan

Worth the time to listen!

This is a brilliant synopsis of World War II (American production) containing the actual radio broadcasts from major events throughout the war.

to my mind, everything turns to black and white. the giants rose from their graves. herr hitler!