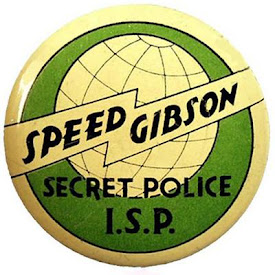 2 Speed Is Inducted into Secret Police

5 The Octopus Orders a Kidnapping

11 The Trio Is Ambushed on Guam

12 The Octopus Plans a Surprise

13 The Arrival in Hong Kong

15 Clint to Stay with Dr Kingsley

20 Speed Is Knocked Out

23 Shot at and Forced Down

25 Prisoners on the Flower Boat

26 Clint and Barney Are Captured

35 Dynamite Must Be Used

36 Speed Is Lost in the Tunnel

38 Barney Heads for the Hut

40 New Instructions from the Octopus

42 The Octopus Puts Plans into Effect

45 The Octopus Traps Speed and Jean

48 Hiding in a Secret Room

50 How to Catch the Octopus

51 Everyone Ready for the Trip

54 The Octopus Will Go to Black Pass

55 Following the Octopus to Tibet

57 Speed Talks with the Octopus Via Radio

62 The Secret Police Are Jailed

64 Pass of the Iron Dagger

80 Speed Caught by the Octopus

82 The Octopus Pictures to the States

86 Marcia and Her Brother Found

87 Splinter and Wu Are Captured

89 Splinter Is Cared For

91 Marcia Recovers from Vapers of Sleep

97 Ready for Attack on the Octopus

98 Time for a Showdown

99 The Octopus and Men Captured

100 The Octopus Jumps from Plane in Flight

103 Safe Landing Is Made

105 No Water Aboard the Plane

110 The Octopus Is Still Alive

111 An Octopus Gunboat Outside

112 Trapped in Cave with No Water

123 Speed, Clint and Carlos in a Bad Storm

127 Plan Flight to the Sahara Desert

131 Clint Lands in the Desert

132 Discovered in the Desert

134 Tricks by the Octopus

136 The Octopus Visits Are Explained

138 Boating Down the Congo

139 Speed Is Confronted by a Leopard

144 Troubles with a Boa Constrictor

146 In the Path of Cannibal Ants

148 Warriors Help in Searching for Hq

155 The Octopus Overheard on the Radio

164 All Are Caught in Jungle Storm

174 An Octopus Agent Confesses to Fire

Comic-book plots: "Troubles with a Boa Constrictor" "In the Path of Cannibal Ants" "Barney Confronted by Talking Gorilla" "The Octopus [character name] Prepares Death Ray Machine" thought-recording machines, miniature spy cameras, secret passages in evil scientist' castle. 15-year old boy sworn in as a member of "International Secret Police", who also can fly a plane. Inter-racial romance: Barney [goofball Secret Police member] swoons over Tanurah, the half Nigerian/half Swahili daughter of a chieftain, buying her "new cloth for a dress" and taking her out for a "bite to eat", he tells her he would sure like to get to know her better... The author, and the times this was created, is fascinated with Shortwave Radio. Much ado about it is in almost if not every episode, and they use it for global communications and two-way conversations. Each episode jam-packed with adventures across the globe, secret meetings, crime fighting, bar fighting. Sample of Female Character Dialogue: "...I'm frightened" Fun, rather exciting, and weird. The entire family will get a big kick out of this and not want to turn it off. Perfect for .mp3 road trip listening. Excellent audio- although I caught two miniscule "record skips" that lasted a fraction of a second, which may even have been on the original recordings, considering the age it was made. As weird and fascinating as "Magic Island" (series on Archive.org Old Time Radio programs), the plots and strangeness seem related in the type of writing.

Among the villages enslaved and tortured by The Octopus were the Chinese hamlet of Wang Du and the African settlement of Khatt Fi. Finally freed by the International Secret Police, Khatt Fi enacted the "Barney Dunlap Award" given for determined perseverance in the face of great odds. For the first 50 years the award came with a roast monkey, until they became too scarce. Wang Du went even further, erecting a statue with flying helmet and sardonic grin in honor of Barney Dunlap which stands today disguised as a Chairman Mao statue. Someday it will be restored, however. Each village had heard that throughout the hard work and dedication of the Secret Police in bringing down The Octopus and freeing their villages, Barney Dunlap constantly reminded everyone of what they were fighting for and the suffering of the Wang Duans and Khatt Fis (Although he mispronounced their names a little.)

This holds up surprisingly well given the high-tech world we live in today. This is a good serial to have on your iPod for those long car trips or train rides or any other time/place where the 15 minute format would help time pass faster than just listening to music or NPR podcasts. An mp3 disc of this series would be a great inexpensive gift for a young boy about Speed's age (approximately 8-12 years old). Another gift idea is to burn the episodes onto 36 compact discs, 5 per disc, then send the discs one at a time, every 10 days, for a year, like a subscription.

Good sound quality for the first 28 episodes, and I'm assuming the rest are fine. Broadly drawn characters without much nuance navigate the predictable plot, with the occasional unforeseen twist. The acting is quite good. Speed is always enthusiastic and Barney is overflowing with bad jokes and exclaiming "sufferin' whangdoodles!" Clint is played by Howard McNear, who went on to be Doc in (the superior radio version of) Gunsmoke, and Floyd the Barber on Andy Griffith. If you are amused by the first episode, and the threat posed to the world by the villainous Octopus intrigues you, you'll enjoy the rest. I like it.

I enjoyed listening to these episodes and found myself looking forward to some free time to continue with the story. There were some slow episodes, but 70 years is a long time to expect something to be thrilling for its entire length. As stated below, if you like the first episode, then this will be a nice diversion for you. It is five of five stars for what it sets out to do, but since some OTR is indeed timeless, 4 of 5 is more appropriate considering all available OTR shows.

I have just started to listen to Speed Gibson of the ISP. And I have to admit for just under 13 minutes they were able to pack a lot of action into these stories. And who doesn't love a cliffhanger? I unfortunately wasn't alive for the golden age of radio. But I must admit, radio definitely forces the mind to make the pictures. Television doesn't force a kid to do anything but reach for another bad of potato chips.

I have only listened to about the first 25% of the episodes and the sound quality is very good. It does seem a bit long but I listen to a few episodes whenever I find time. Mixing Speed in with some of the other OTR shows makes it seem like I'm back in the "old days". Well worth listening too.

Episodes 152 (1939-11-25) thru 161 (1940-01-27) work fine for me. Try re-downloading the file or download the individual files. Or try playing them on a different computer or device. Not all codecs are compatible, depending on how the original files were encoded. 5 stars!