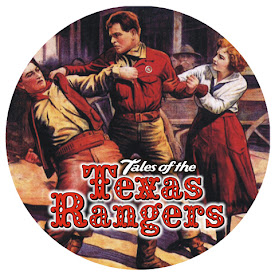 Tales Of The Texas Rangers

Tales of the Texas Rangers, a western adventure old-time radio drama, premiered on July 8, 1950, on the US NBC radio network and remained on the air through September 14, 1952. Movie star Joel McCrea starred as Texas Ranger Jayce Pearson, who used the latest scientific techniques to identify the criminals and his faithful horse, Charcoal, to track them down. The shows were reenactments of actual Texas Ranger cases.The series was produced and directed by Stacy Keach, Sr., and was sponsored for part of its run by Wheaties.

Hanging by a Thread

Dead in the Cards

Birds Of A Feather

One of the best

This is one of my favorite OTR shows. I have probably listened to each one two or three times. To those of you out there who are also fans of Tales of the Texas Rangers, can any of you remember which show talked about cattle who were infected with anthrax? I suppose if I had hours and hours to research it, I could find it myself, but if anyone out there already knows, I would love to share that particular episode with a friend.

One of my favorites. Could hold it's own with todays C.S.I.'s. Good acting, Good casts, and stories. Holds your attention. Wish their were more like it!

Downloaded a couple of episodes of this show. Writing is consistently good, apparently based on real cases and using the science of the day. Main draw of course is movie star Joel McCrea but the other actors are as good or better. I'd be interested in knowing what latter-day Hispanics think of the Mexican character in the 'The Hitch-Hiker' episode. http://en.wikipedia.org/wiki/Tales_of_the_Texas_Rangers

Tales of the Texas Rangers

Oh yes....CSI comparisons....come on folks, these are years apart. Guess you are not old enough to remember the good ol days. Yep, today is good but years ago was simple. Enjoy what you have now. Who knows how long it will last. KR

tales of the Texas rangers

I love these shows, and not just because I'm originally from Texas. The quality of the story-telling, acting, and especially the astonishingly subtle and realistic sound-effects, make these real gems. One thing I appreciate is that they are for adults, not children, and so involve grown-up themes -- bad marriages, business deals gone sour, corruption, addiction, poverty, prejudice. They've been a really satisfying discovery for me as a listener. Certain recurring elements consistently amuse and delight me: the rising inflection when the announcer declares that "the events are a matter of record!"; the way so many episodes turn on analysis of forensic evidence by the Rangers' crack scientists back in Austin; how almost every case ultimately requires Jace to pursue the villain on horseback, so it's lucky that he just happens to have brought along good old Charcoal in a horse-trailer; and the fact that almost every character speaks with what sounds at least something like a Texas accent, except for the Texas Ranger himself, who sounds as if he might have ridden in from Connecticut. A truly outstanding, thoroughly enjoyable series.

When I lived in Japan 30 years ago, I used to listen to old radio shows on the Far East Network - I looked forward to them every Sunday night. When I moved to Los Angeles, I found two episodes broadcast each night at 9PM and repeated again at 2AM. I love all old time radio programs because they allow you to use your imagination for all of the "visuals." Tales of the Texas Rangers is an especially good program because of its authenticity. And, were such sentences still handed out for crimes today, it would be more of a deterrant. I've listened to every episode, multiple times, of Night Beat, Yours Truly, Johnny Dollar, Gunsmoke, The Great Gildersleeve and Tales of the Texas Rangers among others. In fact, I gave away my TV years ago and do not miss it at all.