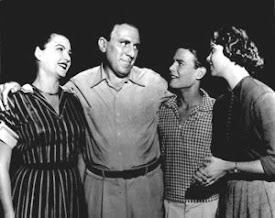 (132 Episodes) "The Life of Riley": starring William Bendix as lovable, blundering, Chester A. Riley, was a radio situation comedy broadcast during and after wartime 40s. Because of its overwhelming radio popularity, Riley graduated as easily to a 1949 feature film, as it did to 1950s television. Also, in 1958, it hit the newsstands, when Dell Comics released "The Life of Riley" in comic book form. . Although "The Life of Riley" had originally begun as a proposed Groucho Marx radio series "The Flotsam Family," the sponsor balked at what would have been essentially a straight head-of-household role for the comedian. Groucho went on to host Blue Ribbon Town from 1943 to 1944 and then "You Bet Your Life" from 1947 to 1961. Producer Irving Brecher saw Bendix as taxicab company owner Tim McGuerin in Hal Roach's The McGuerins from Brooklyn (1942). "The Flotsam Family" was re-worked, with Bendix cast as blundering Chester A. Riley, a wing riveter at the fictional Cunningham Aircraft plant in California. His frequent exclamation of indignation became one of the most famous catch phrases of the 1940s: "What a revoltin' development this is!" The radio series greatly benefited from the immense popularity of a supporting character, Digby "Digger" O'Dell (John Brown), "the friendly undertaker." * TELEVISION: A young Jackie Gleason starred as Riley during the 1st television season of "The Life of Riley." Bendix took over the role of Riley in the 2nd - 6th seasons, after completing a previous committment, which kept him from taking on the role during the 1st season of the TV program. * WILLIAM BENDIX (1906-01-14 to 1964-12-14) Bendix, an American film, radio, & television actor, was best remembered for his title role in the movie 'The Babe Ruth Story' as well as for his portrayal of clumsily earnest aircraft plant worker, Chester A. Riley in the radio, cinema & TV show, "The Life of Riley." William Bendix also received an Academy Award nomination for 'Best Supporting Actor' for his role in 'Wake Island' (1942). Willim Bendix died in Los Angeles in 1964, the result of a chronic stomach ailment which brought on malnutrition and ultimately lobar pneumonia. He was survived by wife of 37 years, Theresa & their two daughters, Lorraine and Stephanie, he was interred in the San Fernando Mission Cemetery. * SOURCE: Wikipedia OTR * def gp ddh

A Timeless Treasure .... too funny for words

I always wondered the origin of the phrase "-leading the Life of Riley" now that I've found it I want to stay in this classic show. The writing is surburb and the delivery pure comical genius.

Life of Riley has got to be the greatest radio comedy ever. Its rare that the old radio comedies have held up as well as Riley. Most of them are kind of dated and corny, but Riley along with The Great Gildersleeve and a couple others are as hilarious today as they were back then.

INCOMPLETE. SEE https://archive.org/download/Lux15/Lux_50-05-08_Life_of_Riley.mp3 FOR FULL LUX THEATER BROADCAST. THIS WAS A DARN GOOD SERIES. WILLIAM BENDIX WAS AN ACTOR OF GREAT ABILITY, AS EARNEST FAMILY MAN, OR AS THUG OF ...WELL, WATCH "THE GLASS KEY"

One of the best comedy shows, like FKB and the GG, it is well written and has a good cast, if your looking for a good laugh its in LOR.

I’ve always loved the life of Riley. Maybe it’s because we share the same name and birthday... 🤔😊