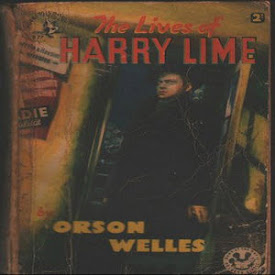 Orson Welles reprised his role of Harry Lime from the celebrated 1949 film adaptation of Graham Greene's novel The Third Man. The radio series is a "prequel" to the film, and depicts the many misadventures of con-artist Lime in a somewhat lighter tone than the character's villainy in the film.

Every Frame Has a Silver Lining

Art Is Long and Lime Is Fleeting

In Pursuit of a Ghost

3 Farthings for Your Thoughts

It's in the Bag

Murder on the Riviera

A Night in a Harem

Blackmail Is a Nasty Word

Paris Is Not the Same

The Lives of Harry Lime

The Third Man (The Lives of Harry Lime) was a old-time radio adventure series that ran in 1951 and 1952. It was based on the 1949 film of the same name. Orson Welles stars as Harry Lime, a perpetually broke confidence man, smuggler, and general scoundrel. He will participate in virtually any criminal activity to make a fast buck, but uses his wits rather than a gun. He draws the line short of murder, blackmail, or drugs. Even so, Harry is an endearing character and listeners love to hear of his one-step-ahead-of-the-law misadventures as he hops around the globe looking for his next pigeon. The zither music of Anton Karas adds a wonderful Viennese ambience. Each episode would begin with "The Third Man Theme" being played, abruptly cut off by an echoing gunshot. Then Welles would speak: "That was the shot that killed Harry Lime. He died in a sewer beneath Vienna, as those of you know who saw the movie 'The Third Man'. Yes, that was the end of Harry Lime... but it was not the beginning. Harry Lime had many lives... and I can recount all of them. How do I know? Very simple. Because my name is Harry Lime." Although often cited as a BBC production, the series was one of a number produced and distributed independently by the prolific Harry Alan Towers. Only ten of the episodes were acquired and broadcast by the BBC in the UK. It was the first time that the BBC broadcast episodes of a dramatic series that it did not produce. The full series was syndicated to radio stations in the U.S. See http://en.wikipedia.org/wiki/The_Lives_of_Harry_Lime

I Also enjoy the free versions too

I would like to comment on the guy that gave it 2 stars, there is NOTHING in life that is free yet here is this website that offers a massive database of free OTR. I personally enjoy the fact that they are free and think it is important that it is, otherwise the shows would dissapear to all but the wealth (those who can aford to pay for these shows. Before i stumbled on this site I was fully prepared to pay the $30-$60 per season. Instead I looked around for a little bit and in five minutes I found this site and have recently purchased a 1TB hard drive and am creating a massive archive of all the OTR on the site so far I have about 210 shows but each show has 3-4 seasons in it so I have 1000+ seasons of just about every type of Radio show you could want. I love the fact that I got it for free. It amazes me that all this stuff is free because most of them arent in the store. it further amazes me that someone would write a 2 star review for something that is of no expense to them their completely and totally free! I give everything on this site 5 stars for that fact.

Like most complete or near-complete collections, some episodes have better sound quality than others. The condition of the transcription disc or reel-to-reel tape used for that particular episode is the reason for the lack of consistency. If someone is really upset with the sound quality, they can clean it up themselves with a program like Audacity and post that improved sound file to the archive. I'm sure such efforts would be appreciated, if not financially rewarded. As far as this series goes, it's top-notch all the way, with great and fluid performances by Welles and supporting cast.

The title of episode 15 was actually "Art is Long and Lime is FLEECING". Not fleeting.

Highly entertaining, this series takes the tone of "The Third Man" film's famous cuckoo clock speech and expands it into several prequels to that film. The settings are exotic Hollywood fantasy ports-of-call such as Algiers and Budapest. The narrator and voice of Harry Lime is, of course, Orson Welles, the finest radio actor ever and capable of making entertainment out of reading a deli menu. As these radio plays are well written and performed, the only downside might be the overuse of Anton Karas' renowned zither music from the film. The earlier episodes take themselves far too seriously, but by the time an episode like "The Dead Candidate" rolls around, "The Lives of Harry Lime" is flat-out comedy. As noted elsewhere, the same source material was used here for an episode ("Horse Play") as the 1973 film "The Sting." There are loads of wacky accents, cartoon villains, mysterious Arabs and femme fatales. Those looking for political correctness regarding ethnic and gender stereotypes should look elsewhere, although the later episodes are performed so tongue-in-cheek it's hard to take offense. By the end of the run the tone gets close to Firesign Theater "Nick Danger" territory. Considering their age, sound quality of the transfers is good. As the cast members other than Welles are not named, it is fun to pick out the voices of old pros like Sebastian Cabot. All told, this series is well worth listening to.

Harry Lime - Worth your time! Forget the Whine!!

The Lives of Harry Lime is one of my favorite OTR shows. Good to above average writing for the 27-28 minutes that had to fill. Just as an FYI...this site is a .ORG. Huh? Well, that means they can't afford all those fancy machines (and time/money) to remove those tiny fragments of annoying hiss and gurgle that some find so bothersome. Let me tell you, the quality on most of the recordings is very acceptabe and rather good! Please remember much of the recordings on this site are from reels or record and from a very long time ago. If the occasional hiss bothers you, check your meds, try a bit of yoga or practice the great lost art of concentration. It's amazing the things you hear when you learn to focus on the things that matter. Just try to cope with the wiggles and crackels as you listen. I know, I know...CD and DVDs don't do that kind of stuff. Of course I can only bet that most of the complaints are coming from those who did not grow up listening to tapes, 8-track and records. Shame. The sound quality was so much better than the little plastic disks they use now.

I listened to Radio shows from childhood at night in bed with the glow of the tiny radio light on the channel tuner. Then later when I was in Viet-Nam on AFRS, When I was discharged I started to collect Tapes of OTR shows. I soon found out I had a serious Tinnitus problem. This caused trouble trying to get to sleep. I found that the playing of the shows through a small pillow speaker distracted me so as to blot out the constant squeal of the Tinnitus. Then I discovered that listening to the Radio Shows while driving on long trips seemed to speed up the time taken on the ride. When you concentrate on the shows the time flies by.I am talking about trips that take hours (8 - 16 hours) I am now 70 years old and still enjoy them. TV stinks it dulls your imagination, OTR allows you mind to relax and mentally visualize what you are hearing. Thank God for OTR and saving the Radio Shows. Chickenman PFD E-31

This series is a real romp for Welles fans, a Comedy/Drama full of lines to relish. I'd say Welles is obviously enjoying himself here. This may constitute a spoiler, but I will say that as often as Lime's schemes fall through, with the promise of huge riches slipping through his hands, I wonder how he managed to live in the capitols of Europe. In more than one episode, he comments in the beginning on his own "bustitude," with only enough money for another beer as the story starts. Yet by the end of the episode, he doesn't have a dime to show for all his effort. And other times the reward for a scheme he thought worth millions of francs turns out to be narrowly escaping jail, nothing more. My favorite episodes are It's in the Bag, Art is Long and Lime is Fleeting, Greek Meets Greek, Paris is not the Same, Clay Pigeon, and The Third Woman.