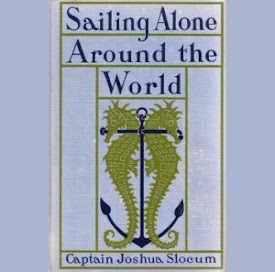 Sailing Alone Around The World

Joshua Slocum was the first man to sail around the world alone in a small boat. He personally rebuilt an 11.2 metre sloop-rigged fishing boat that he named the Spray. On April 24, 1895, he set sail from Boston, Massachusetts. More than three years later, he returned to Newport, Rhode Island, on June 27, 1898 having circumnavigated the world, a distance of 46,000 miles (74,000 km).

In 1899 he described the voyage in Sailing Alone Around the World now considered a classic of travel literature. It is a wonderful adventure story from the Age of Sail and a book of which Arthur Ransome declared, "boys who do not like this book ought to be drowned at once". (Summary by Alan Chant and Wikipedia) (7 hr 52 min)

A Timeless and Memorable Adventure

Easily the most satisfying "cover-to-cover" read in my LibriVox experience (a few dozen or so). My compliments to the reader. And to those who would give "Sailing Alone" a try, I recommend keeping a world atlas close at hand. The added reference material markedly enhanced my appreciation and understanding of Slocum's incredible voyage.

The narration could not have been better. The tale itself was interesting because it was such an unusual accomplishment and because of all the unique situations he encountered along the way as well as his apt handling of every one. (Well, except maybe the goat)!

Well told true tale...chock full of vignettes from a bygone era.Entertaining every word.It's sad to hear how many things the author describes that are no more.Very well read too.

Wonderful story filled with the excitement that only a voyage of this magnitude could elicit. Captain Slocum did what others considered impossible, then speaks to the heart of the reader/listener to rise to the challenge of our dreams - to accomplish what others may think foolish, improbable or impossible... cast off personal fears and cross one off your bucket list. As for the reading of this book I can say that Captain Slocum would be pleased and hard pressed to find another as well fit for the reading. Great book... thanks to everyone involved.

Nova Scotia born, with family roots in New England, Captain Slocum commanded some of the finest tall ships that ever sailed the seas. On April 24, 1895, at the age of 51, he departed Boston in his tiny sloop Spray and sailed around the world single-handed, a passage of 46,000 miles, returning to Newport, Rhode Island on June 27, 1898. This historic achievement made him the patron saint of small-boat voyagers, navigators and adventurers all over the world. Many thanks, Mr Chant, for your wonderful reading. Highly recommended!

Enthralling from the first page to the last. I am in jaw-dropping awe of the adventurer’s bravery, skill, intelligence, and physical stamina. And, I don’t know who reader Allan Chant is, but I know he is no ordinary narrator. Anyone with Mr. Chant’s consummate skill must be a professional of some sort. A trick I learned is that when you stumble upon a top-tier reader, you would do well to enjoy all his works.

Enthralling from first page to the last. I am in awe of the adventurer’s bravery, skill, intelligence, and physical stamina. I don’t know who reader Allan Chant is, but I know he is no ordinary narrator. Anyone with Mr. Chant’s consummate skill must be a professional of some sort. A trick I learned is that when you stumble upon a top tier reader, you would do well to enjoy all his works.

A Classic Tale of the Sea

This is a great sea story, a man alone against the elements in the world’s first single-handed circumnavigation. It’s particularly enjoyable because Slocum highlights his voyage mainly addressing the landfalls rather recounting every solitary day of his journey. The reader is excellent. I highly recommend this book. My only regret is that I didn’t listen to it years ago.