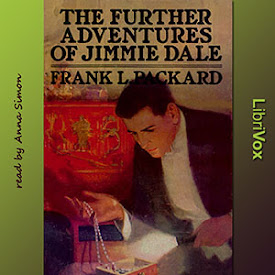 The Further Adventures of Jimmie Dale

In the previous book of adventures, we met Jimmie Dale, a wealthy playboy by day, who at night put on a disguise and became The Gray Seal, a daredevil entering businesses or homes and cracking safes, always leaving a diamond shaped, gray paper "seal" behind to mark his conquest. He never took anything, but just wanted the thrill of it. This had spun out of control when a mysterious woman, whom Jimmie Dale nicknames The Tocsin, caught him at it and blackmailed him into doing her bidding. On her instigation, he got involved in numerous underworld crimes, righting wrongs and protecting innocent bystanders. The Tocsin is herself in hiding from her enemies in the underworld, and the two of them barely escape with their lives when they are pursued by both the criminals and the police.

At the end of those previous adventures, Jimmie Dale thought he had left off his dealings with the underworld for good, and could settle down with the woman he loved. But now, The Tocsin has disappeared. Jimmie Dale is drawn back into the world of crime, crooks and opium dens to look for her, and The Gray Seal is resurrected. (Summary by Anna Simon) (10 hr 31 min)

The man with the scar

"Death to The Gray Seal!"

The rehabilitation of Larry the Bat

At half past one

The voices of the underworld

Caught in the act

One chance in ten

The beginning of the end

At five minutes of twelve

As with the first book, the chapters seem to be written as if they were each an episode of a serial, so there is quite a bit of repetition, but the characters and story make it a worthwhile listen. Anna does a wonderful job, as always.

better than the first. Mostly because of the reader. several times I found myself angry at the protagonist for doing something extremely stupid. My on complaint is the overuse of the phrase "and he, Jimmie Dale."

The reader for this book is great! The book is, as one would expect for early 1900s, a bit over dramatic, and sappy; it was a fun book!

Anna is one of the best readers on Librevox. Thanks for the book, Anna!

very well thought out. enjoyed it very much

well written. such a strange and exciting tale

the further adventures of Jimmie Dale