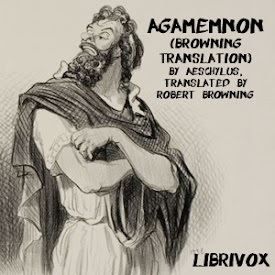 The play Agamemnon details the homecoming of Agamemnon, King of Argos, from the Trojan War. Waiting at home for him is his wife, Clytemnestra, who has been planning his murder, partly as revenge for the sacrifice of their daughter, Iphigenia, and partly because in the ten years of Agamemnon's absence Clytemnestra has entered into an adulterous relationship with Aegisthus, Agamemnon's cousin and the sole survivor of a dispossessed branch of the family (Agamemnon's father, Atreus, killed and fed Aegisthus's brothers to Aegisthus's father, Thyestes, when he took power from him), who is determined to regain the throne he believes should rightfully belong to him. Summary by Wikipedia (1 hr 44 min)

The reading is excellent but the Robert Browning translation is terrible.