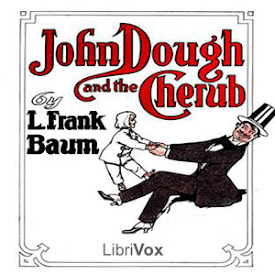 John Dough and the Cherub

An evil Arabian sorcerer loans a golden flask full of the Great Elixir - a magic liquid that endows a person with pronounced health, strength, and longevity - to a colorblind baker's wife to stop it falling into the wrong hands. Unfortunately, the woman mixes up the Elixir with her rheumatism medicine, which, through even more misunderstanding, then ends up being used in batch of gingerbread. Out of this dough comes John Dough, a six-foot novelty gingerbread man who promptly comes to life and runs away, in an echo of an old nursery rhyme. Pursued by the evil sorcerer, who wants to eat him to gain the power of immortality, and children, who want to eat him because he's made of cake, John Dough and his sidekick the Cherub flee through a variety of strange fantasy lands and bizarre scenarios, including an encounter with "The King of Fairy Beavers," an animated Wooden Indian, a girl executioner who never gets to kill anybody and weeps over the fact, a two-legged talking horse that bullies its rider, and the youthful and tyrannical "Kinglet" of Phreex. Will John Dough escape those who want him eaten?
Though the novel (published in 1906) is not considered part of the Oz canon, its main characters make cameo appearances in The Road to Oz (1909). - Summary by Mary Kay, E. Toland and Wikipedia (4 hr 27 min)

The Palace of Romance

Under Land and Water

The Flight of the Flamingoes

King Dough and his Court

John dough and the cherub

I really like Baum and the readers did very well