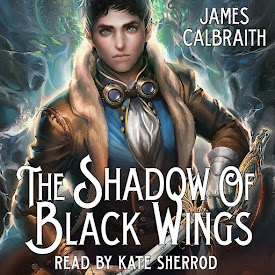 The Shadow of Black Wings

It is the Sixteenth Year of Queen Victoria. In the powerful empire of Dracaland, Bran, a young dragon rider, joins his father on a military expedition to the mysterious lands of the Orient. In the reclusive Yamato, Sato, a tomboy samurai girl, strives to prove her right to inherit her father's school of western magic. Nagomi, a timid shrine apprentice, is haunted by the visions of dark future she must keep secret even from her best friend.

They don't know it yet, but their paths will cross... And when they do, nothing will ever be the same again.

Welcome to The Shadow of Black Wings, a steam-powered romp across the land of dragons, wizards and samurai. It's big, it's fast, it's been compared to Tolkien in terms of world-building, it has strong female characters and lots of carefully researched detail. You will meet the Royal Marines sailing mighty ironclads and Chinese walking machines; mysterious warlords and crazy inventors; you will discover dark prophecies, family secrets and blood-thirsty demons. And all that in just the first volume!

"Fast paced and full of energy"
--Adrian Tchaikovsky, author of the Shadows of the Apt

"This manuscript is full of highly crafted detail that will make readers shiver at times with fear and delight ... a familiar yet highly original fantasy that is a worthwhile read."
-- Publishers Weekly

"The real-world cultures are incredibly well-researched and truthful, and yet well-balanced with the fantasy elements. An intriguing and impressive series."
-- Ben Galley, author of the Emaneska Series

Episode 6 - The Songs of Distant Ocean

Episode 9 - The Day of the Ship

Episode 11 - It Fell From Heavens

Episode 14 - The Streets of Kiyo

Episode 17 - The Scent of Wisteria

Other books by James Calbraith

Enjoyed the reader, but the actual plot feels too drawn out and lacks what could’ve been some very exciting action scenes. The author is great at giving physical details of everything, but when it comes to the story, some scenes make little to no sense why they were important to the story. Also, the jumps ahead in time are too often and at some of the worst moments. For example, shortly after Bran (finally) starts his journey, one part builds up to a fight, but then it’s suddenly a month later - no details of the battle. What’s worse is that that past month is then told in very brief detail, but is of events that sound like they actually would’ve been interesting to read. Knowing this is the first of a series, I think it did a great job of building the world up, so I’d be interested in listening to the rest of the series if/when it’s available, but I hope the later novels focus more on the plot and have more and longer action.

I enjoyed this audiobook. Like some commented, the transition from the initial character’s view seemed overly long. Perhaps it would have been better to weave the storyline together. At times, I found myself wanting more description. The story would build up, and then conclude too quickly. An example of this was when the ship was attacked by the serpent and Bran’s father hopped on his dragon and.... the chapter ended and the story moved on several weeks later. I did enjoy the concepts of magic and looked forward to more in the subsequent books.

the production quality of the audio book is one of the best I've seen it really helps draw you into the story; the book itself is also very interesting, managing to make the two main settings for the book Wales and Japan. Anyone who likes the idea of dragons and magic would definitely enjoy this book, highly recommend. (only whish the other 4 books were also in audio format, I would definitely pay for them)

Great listen! Leaves with such a cliff-hanger... I need the next one! NOW! I really hope he (James Calbraith) decides to either Pod-cast the next ones in the series, or even release them as audiobooks. I would certainly pay to hear them ;) I feel like he's only just scratched ...

I reall enjoyed this book. When I read the description it intrigued me enough to try it, but I had my reservations. Nonetheless it pulled me in quickly and didn't let go. I found myself ignoring other podcasts to listen to this one. Of course now the problem is getting ...

the production quality of the audio book is one of the best I've seen it really helps draw you into the story; the book itself is also very interesting, managing to make the two main settings for the book Wales and Japan. Anyone who likes the idea of dragons and ...

I'm not going to lie, I was entranced by the cover but as I started to listen to this I forgot about the cover and was enraptured by the author. definitely will look for the other volumes to see how this plays out.

I could only bear 2 minutes of this. The narrator sounds as if she's trying to make her voice sound more deep than it is and frankly it sounds uncomfortable and weird. Totally ruined it for me.