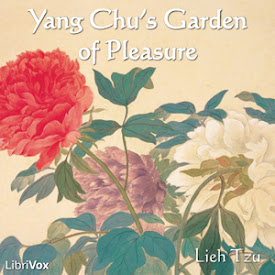 At the Court of Liang at the period of Yang Chu, about 300 B.C., the philosophers were treated as guests of the reigning king, who reserved for them lodging and maintenance, and encouraged all who had any pretence to the pursuit of truth and wisdom. Whether or not Yang Chu was actually a native of the Wei State, or whether he came there drawn by the attraction of a critical and unrivalled audience, it is at least certain that he settled there as small proprietor, probably in the reign of King Hwei, and continued there till his death, about 250 B.C.

One may imagine a condition of life in many respects somewhat analogous to the life of Epicurus in his famous Athenian Garden. To the philosopher of pleasure and contentment came pupils and disciples, discourses were held in much the same way as at an identical period discourses were held in the garden at Athens, and it is to these discourses, memorised and recorded by his favourite pupil Meng-sun-Yang, that we most probably owe the single fragment of the teaching of Yang Chu that remains, a fragment complete and explicit enough to enable us to form a clear estimate of his teaching and philosophy. - (from the Introduction by Hugh Cranmer-Byng) (1 hr 36 min)

Puts some things into context

The philosophy is interesting, and it really says a lot about the society it was written about. Lots of vain rich people so worried about being famous they would do silly things that would get them killed for it. The reader did a good job, and kept a good volume and pace.

For those that have a deep interest in Tao, the nature of reality. this philosophical work is part of the path to the transcendence of the relative realm in to the absolute realm of being.