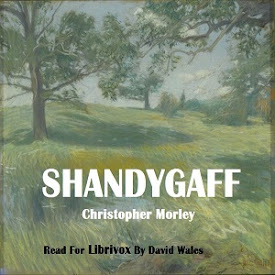 A number of most agreeable Inquirendoes upon Life & Letters, interspersed with Short Stories & Skits, the whole most Diverting to the Reader. (Title page) SHANDYGAFF: a very refreshing drink, being a mixture of bitter ale or beer and ginger-beer, commonly drunk by the lower classes in England, and by strolling tinkers, low church parsons, newspaper men, journalists, and prizefighters. Said to have been invented by Henry VIII as a solace for his matrimonial difficulties. It is believed that a continual bibbing of shandygaff saps the will, the nerves, the resolution, and the finer faculties, but there are those who will abide no other tipple. (John Mistletoe: Dictionary of Deplorable Facts.) Christopher Morley (1890 – 1957) was an American journalist, novelist, essayist and poet. Here are thirty-five of his humorous essays. - Summary by Book Preface and david wales (7 hr 46 min)

Introductory: Titles And Dedications; The Song Of Shandygaff

A Question Of Plumage

The Art Of Walking

The Head Of The Firm

Frank Confessions Of A Publisher's Reader

The Haunting Beauty Of Strychnine

The Hilarity Of Hilaire

A Casual Of The Sea

Time To Light The Furnace

A Poet Of Sad Vigils

A Friend Of Fitzgerald

A Venture In Mysticism

A Morning In Marathon

The American House Of Lords

Confessions Of A Smoker

I found this very entertaining. the reader did an excellent job