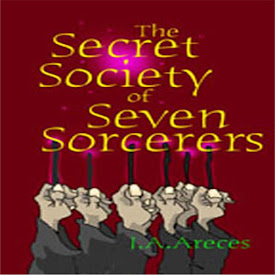 The Secret Society of Seven Sorcerers

Nicholas Fidgewidge returns to claim Lord Bane's crystal ball causing Jesse to seek the wizard Ch-U-Ch’s aid. Meanwhile, the remaining sorcerer’s are being scared to death, and with Raven Claw out of jail the chase begins. However, things quickly become very complicated when the wizard’s two teenage boys get involved. On Halloween night, Lord Alex will become the next Dark Sorcerer even if it means destroying everyone who knows of his initiation. Follow the wizard Ch-U-Ch, his cousin Ana and Jesse into the dark world of the Society as they try to prevent Lord Alex from joining the Circle of Seven and achieving a greater goal, to obtain the secret’s of Lord Bane’s crystal ball. On Halloween night, everything must remain a secret at any price.

Hi Cayce and Gail, I am so glad that you are enjoying SSSS. I'm also enjoying recording it very much. Unfortunately, this chapter is a long one, to long for just one episode so I have to divide it into a couple of episodes. Please hang in there and continue ...

Hi J, I just finished the secret society of seven sorcerers and I wanted to let you know that I really love your stories. I've read Interview for a Wizard twice now and loved how you had such a thick plot in the second book. When the read the first ...

I listened to this book as a podiobook. I listened to the first one as well. I am really enjoying the series. Though it is a fantasy novel it is set in modern times and the characters are down to earth and likable. This book had a good story line and mystery to it. The author also manages to give the characters unique personalities and add in some comedy to break things up which I enjoy. Sometimes it can be a bit long winded but it's a easy to get past that when you are listening to a book. This book was actually much more exciting than the first. I especially liked that Ch-U-Ch's two kids were involved. It made the story more lighthearted and dangerous at the same time. I look forward to them being more involved in the next book. I am also eager to see what comes of Jesse and his new love interest Kiki. However there is one little quirk that I can't get my head around. It's the name of the wizard Ch-U-Ch. Everyone else in the book has a normal every day name except for him and I just can't understand why. It wasn't explained in the first book and it wasn't explained in this one. The other was Lord Alex. At first I thought he was a Lord and that's why he was called that but then I realized his first name was Lord. That was another thing that just seemed odd. Every other person in the book in the wizard or folk world have average names but not those 2 and I would love to know why. I know other people have mentioned that they don't like that the full name of the Allavands Witches and Wizards Corner Store is said every time it's mentioned which is often but this doesn't really bother me. It's kind of just a staple of the books. I got used to it and kind of like it. Overall this is a fun series about wizards and witches and Jesse who is a folk that runs a magical supply store but somehow always gets mixed up in the latest action and mystery.

Okay, if a bit messy

Some parts I liked, some I didn't. Overall, it was okay. I liked how the young wizard boys battled with their feelings and how their conflicting emotions about being wizards were described. Many similar stories don't deal with that side at all. There was excitement and action in the plot that I enjoyed. However, in the end it all felt a little messy, the story went all over the place and fell apart a little. Plus the descriptions of female characters were a bit clichéd, they were all just decorative extras, and not very enjoyable to a female listener. Still the reading was done well, although I didn't like the music this time as much as in the first part.

I'm so happy there are two more books to listen to. Thank you so much for sharing your brilliant imagination!! I look forward to the next book, I'm actually starting it tonight. I've become quite attached to the character's. One thing I'm not sure of though...what happened to Jessie's parents? I'm not sure if it was explained in the first book or not. I can't remember if it was, if so I apologize for the silly question. thanks

Let me start off by saying WOW what an improvement! The first book was iffy for me but this one absolutely put me through the roof. I absolutely loved it! Everything I thought was missing from the first was definitely made up for with this and MORE. I'm SO I glad that I continued onward with these. You did a fabulous job here and I look forward to the next...and the next! :)

Your voice kept me entranced ! I could see everything that was going on as you told me the story ! WOW Thank You no reader has ever done that before !! I'm a 64 yr old fan for life now ... I can't wait to hear all of your stories now ...💓

Hi Michael, Your music is wonderful! MusicAlley.com provides LuELLa Unveiled free for podcast users. There is no contact information on MusicAlley.com. I did provide credit for your music on that particular episode as with all music used in other episodes. If you require more information, please contact me directly through ...