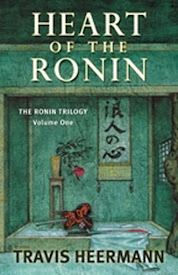 Heart of the Ronin

Thirteenth-century Japan is a dangerous place, even in a time of peace. Capricious gods, shape-changing animals, and bloodthirsty demons are as real and unpleasant as a gang of vicious bandits. From the wilderness emerges a young, idealistic warrior with his father’s mysterious sword on his hip, a wise, sarcastic dog at his side, and a yearning in his heart to find a worthy master. He dreams only of being samurai. Little does he suspect the agony and glory that await him when his dreams come true.

Finding a master should be easy for a warrior as skilled as Ken’ishi, but the generations-long wars for the Imperial throne have ended. The land has settled into an uneasy peace and cast multitudes of proud, powerful warriors to the four winds. The new peace means that these masterless warriors, ronin, often must stoop to crime and banditry to feed themselves. Ken’ishi finds himself plagued by the hatred and mistrust of peasants and samurai alike.

When he saves a noble maiden from a pack of bandits, he and his faithful dog become enmeshed in the intrigues of samurai lords, vengeful constables, Mongol spies, and a shadowy underworld crime boss known as Green Tiger. But Ken’ishi has a few secret weapons of his own, granted to him by his mysterious past and his magical upbringing. If only he knew more about his mysterious past, his parents’ murder, and the sword that seems to want to talk to him. . . .

Heart of the Ronin is an action-packed historical fantasy, set against the backdrop of ancient intrigue and impending war, the first of a sweeping three-part epic filled with deadly duels and climactic battles. Creatures of folklore and myth are as real as the katana in one’s hand. And just as deadly.

"A fusion of historical fiction and adventure fantasy, the first volume of Heermann's Ronin Trilogy is a page-turning folkloric narrative of epic proportions. In a strange, supernatural feudal Japan, 17-year-old warrior Ken'ishi, a masterless samurai with a mysterious past and a legendary sword, saves the life of Kazuko, a powerful lord's daughter. Soon he becomes entangled in a deadly web of treachery, obsession and vengeance along with a bevy of conspirators, spies, assassins and otherworldly monstrosities. Though Heermann does little to push the boundaries of the subgenre, his writing style is confident and fluid, his characters are well developed and his serpentine story line anything but predictable. Numerous tantalizingly unresolved plot threads will have readers anxiously awaiting the second installment in this gripping tale of ill-fated love, betrayal and destiny. " - PUBLISHERS WEEKLY

"Heart of a Ronin is a solid, likeable adventure story, sure to please fans of Japanese culture, and fantasy readers alike." - ADVENTURES IN SCI-FI PUBLISHING

If you like your audiobook interrupted regulary - like beginning middle and end of EVERY chapter, then this is the book for you. Sales pitches, ridiculous warnings of harm from the violent content, (do these fragile snowflakes really exist?); and totally inappropriate music; all this ruins what is a well-written tale. My adice to the writer is, leave production to someone better qualified and focus on completing your writing projects properly.

Had plenty of promise from the outset, but seem to drag along at times and got overly sentimental, which really spoils a story for me. Perhaps that is just a bloke thing though!. I wouldn’t bother listening to the sequel, assuming it even exists, as I did start to get a bit bored towards the end.

Did not like over loud music inserts, and I lost interest in the choppy story before half the first chapter was narrated. I would suggest the writer read many of the Viking Sagas and/or JRR Tolkien over to see how to blend the descriptive parts of a story well with the action/dialog parts.

I really loved this, but like some of the other comments I was very disappointed with the end. Too many threads left hanging even for a series. I would like to have seen a bit more of the 'transformation' - I felt that that whole area of this story was ...

Excellent story. I loved it. Of course I was disappointed with the "end" if you can call it that. Obviously it is just the "arc" that is over. The story was well written, and the characters were well developed. Great job...awaiting the next scroll. I do have one constructive criticism ...

Just finished. First Podiobooks.com story I felt I must comment on. Great writing and pace, based on how fast the 30 parts went. Frustrated at ending but I feel that way when ever I come to the end of a part in a multi part series. Loved the mystical creatures ...

As wonderful as this story was, Mr. Heerman has given no indication for over a year and a half as to when to expect the sequel. I certainly do not consider Heart Of the Ronin a "complete" novel. Way to many things left hanging. Please Mr. Heerman throw us a ...