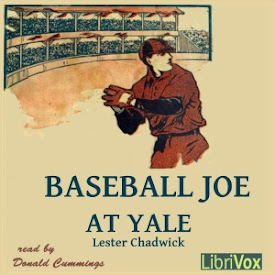 "Baseball Joe" Matson's great ambition is to become a professional baseball pitcher. The Baseball Joe series follows his career as he seeks to attain his goal. In this volume, Joe follows the wishes of his parents and attends college, and seeks to join the Yale University varsity baseball nine. Much to his disappointment, he finds that he cannot immediately do so, due to a Yale rule barring Freshmen from placement on the varsity. We follow his college adventures through his first and second years, with emphasis on his trials in making the team in year two, including the attempts of a rival pitcher to keep him off the team.

Lester Chadwick is one of dozens of house pseudonyms created by the Stratemeyer Syndicate in the early to mid 1900's, to "author" children's series. Contract writers (whose identities were to remain unknown under tight secrecy) were hired to write the books in the series under the various names, usually multiple writers contributing volumes to a particular series. Howard R. Garis (1873-1962) is thought to have ghost-written most, if not all, of the 14-volume Baseball Joe series. - Summary by Donald Cummings (5 hr 9 min)

The college sports of a bygone era and the student life of the time are presented with an all-male character Llosa. Reminds me of authors of the same time period whose writing gives an all girls view. This book is well read and enjoyable with some unexpected twists. Worth the listen— thanks to the reader for a job well done.