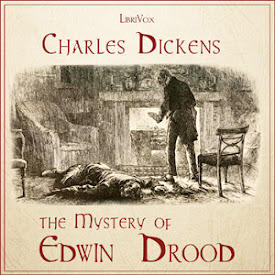 The Mystery of Edwin Drood

The Mystery of Edwin Drood is the final novel by Charles Dickens. The novel was left unfinished at the time of Dickens' death, and readers have often speculated what the ending might have been. The novel is named after Edwin Drood, but it mostly tells the story of his uncle, a Jekyll-and-Hyde-esque choirmaster named John Jasper, who is in love with his pupil, Rosa Bud. Miss Bud is Drood's fiancée, and has caught the eye of the high-spirited and hot-tempered Neville Landless, who comes from Ceylon (now Sri Lanka) with his twin sister, Helena, and immediately makes an enemy of Drood. It is hinted strongly that Jasper is the murderer, but it is not known whether Dickens had a surprise in mind. (Summary from Wikipedia) (12 hr 21 min)

A Dean, and a Chapter Also

More Confidences Than One

Birds in the Bush

A Picture and a Ring

Both At Their Best

When Shall These Three Meet Again?

The Shadow on the Sun-dial

A Gritty State of Things Comes On

Dickens' final novel, left unfinished at his death in 1870, is a mystery story much influenced by the 'Sensation Novel' as written by his friend Wilkie Collins. The action takes place in an ancient cathedral city and in some of the darkest places in Victorian London. Drugs, disappearances, sexual obsession, disguise and a possible murder are among the themes and motifs. A sombre and menacing atmosphere, a fascinating range of characters and Dickens' usual command of language combine to make this an exciting and tantalising story. Many thanks to Mr Chant for his breathtaking recording. A true delight to listen to. It will appeal to all enthusiasts of classic British literature and to the distinguished listener!

This reader was absolutely perfect for this book. The narrator's British accent was perfect for Dickens, and his character voices had all of the color that Dickens is so good at creating in his characters. I'll definitely look for this reader again.

Too bad it wasn't finished

Nicely read, although I agree that some of the voice characterizations made it hard to understand the words. I also had to adjust the sound files so that they weren't so drastic in volume fluctuations (between deep-chested male voices and quieter narration, for example). My biggest complaint are the bells at the start and end of each file. Nice atmosphere at first, but they got annoying very quickly! I'm glad LibriVox doesn't allow such sound effects anymore.

Great recording! Thanks a lot to the narrator! I saw the movie on tv and got curious, and listening to this is even better!

the reader is excellent! now I have to find one of the "finished" versions to listen to.

Well read, and my only complaint about the book is that Dickens did not live to finish it!

One of the BEST READERS, I LOVE to listen to him.

One has a good idea of the culprit!