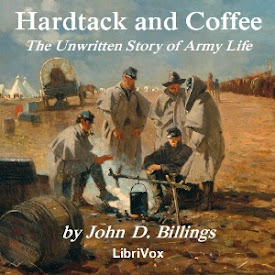 Hard Tack and Coffee: The Unwritten Story of Army Life (1887) is a memoir by John D. Billings, a veteran of the 10th Massachusetts Volunteer Light Artillery Battery in the American Civil War. Hard Tack and Coffee is not about battles, but rather about how the common Union soldiers of the Civil War lived in camp and on the march. It covers the details of regular soldier life, including enlisting, how soldiers were sheltered, Army rations, offenses and punishments, a day in camp, boxes from home, foraging , the army mule, hospitals and ambulances, clothing, breaking camp and marching, and other similar topics. Billings has been described as a skillful writer, both humorous and informative. The historian Henry Steele Commager called the work "one of the most entertaining of all civil war books". - Summary by Wikipedia (11 hr 42 min)

Introduction and Chapter 1 - The Tocsin of War

Chapter 3 - How the Soldiers Were Sheltered

Chapter 14 - Some Inventions and Devices of the War

Chapter 18 - Breaking Camp - On the March