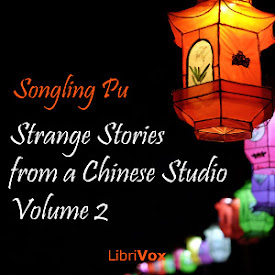 "Strange Tales from a Chinese Studio" or "Strange Tales of Liaozhai" is a collection of nearly five hundred mostly supernatural tales written by Pu Songling during the early Qing Dynasty. It was written in Classical Chinese rather than Vernacular Chinese. Pu is believed to have completed the majority of the tales sometime in 1679, though he could have added entries as late as 1707. He borrows from a folk tradition of oral storytelling to put to paper a series of captivating, colorful stories, where the boundary between reality and the odd or fantastic is blurred. The cast of characters includes vixen spirits, ghosts, scholars, court officials, Taoist exorcists and beasts. Moral purposes are often inverted between humans and the supposedly degenerate ghosts or spirits, resulting in a satirical edge to some of the stories. Ghosts and spirits are often bold and trustworthy, while humans are on the other hand weak, indecisive and easily manipulated, reflecting the author's own disillusionment with his society. ( Wikipedia) (9 hr 50 min)

75 - The Three States of Existence

76 - In the Infernal Regions

81 - The Injustice of Heaven

107 - The Fisherman and his Friend

125 - The Marriage of the Virgin Goddess

137 - Feasting the Ruler of Purgatory

Appendix A Part I - Taoist Temples

Appendix A Part II - The Ten Courts of Justice

thanks librivox for yet another enlightening collection.

interesting stories with very good reading, the anthology somewhat spoiled by the constant repetition of credits at beginning of every chapter. Is this really necessary when some chapters are so very short?

"Princess Lily" was enjoyable & very sweet. All were well read.