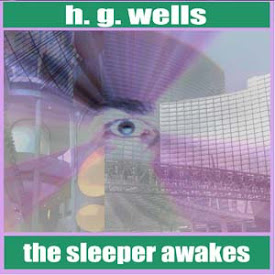 The Sleeper Awakes is a dystopian novel about a man who sleeps for two hundred years, waking up in a completely transformed London, where, because of compound interest, he has become the richest man in the world. He has been the famous Sleeper for centuries. A fanatic socialist, the main character awakes to see his nightmares realized, and the future revealed to him in all its horrors and malformities. The people adore him, and their masters - the supervisors of his legacy who rule in his name - do not want him breathing. (Summary by Stephan and Wikipedia) (8 hr 14 min)

PREFACE TO THE NEW EDITION (800 words)

THE OLD MAN WHO KNEW EVERYTHING (3700 words)

THE STRUGGLE IN THE COUNCIL HOUSE (4200 words)

WHILE THE AEROPLANES WERE COMING (1700 words)

THE COMING OF THE AEROPLANES (4000 words)

This books is great, I spent every minute enjoying it. But when the ending came and went. I was like: "is that it? Honestly?"

I found this story enthralling and the concept and unfolding of the story fascinating. I've read enough hg wells to not expect much of an ending and therefore wasn't too disappointed. What a talent though! He was brilliant!

"tumultuous/tumult" -H.G. Wells, every page or so.

Never having read this book, I realise now how influential the story has been. Of course Woody Allen's 'Sleeper' is based closely on H.G. Wells' 1889 work, but it has clearly influenced other works, from Orwell's 'Nineteen Eighty Four' to 'The Matrix', and even 'The Eternal Sunshine of the Spotless Mind', not to mention 'Brave New World' In terms of predicting the future, Wells gets many things wrong of course, but it's quite extraordinary how many things he gets right. And yes, it's a bit racist. Well, a lot racist. Sexist too of course. But most books of that time in England were. (Sherlock Holmes was a terrible old racist too of course.) Still, well worth reading. It's actually a gripping read, ...a ripping yarn, from start to finish. As to the readings and the recordings, they are generally very good. Just one chapter is so badly recorded that it is hard to understand, and that recording really should have been rejected, for which I dropped a star. It's also curious to my English ear that none of the American readers seem capable of pronouncing the name Graham, and various variations are employed. For the record, it's pronounced to rhyme with 'slay 'em'. "Slay 'em, Graham!"

H.G. Wells has written an outstanding story here. Of course it is of its own time and the idea that compound interest could lead to ruling the world is clearly daft. But, perhaps when he was writing this story, governments were more honourable and wouldn't just freeze peoples accounts at the drop of a hat ( sorry Iceland ). The sleeper wakes in world so changed that he barely understands what is happening and finds himself being manipulated and used. Through the lies and deceit he struggles against the things that surround him, and he finds himself. With battles on and under the ground and even fights taking place in the air we do have a good deal of action. This is classic period sci fi, written by the master and well read to boot. There tended to be hum on this recording but this is easily overlooked and put from your mind. For more free audio reviews visit http://freeaudioreview.blogspot.com/

Wells captures the never ending social upheaval that humanity seems cursed to endure and repeat, painting a fast future generation struggling with the same issues, and humans fighting for equality and status. Writing this review 122 years after the book was written, it also points out the changes occurring since it was conceived,, how his visualization of flight and other transport have comes to fruition or not, and a free other technical curiosities. All this make it a very interesting read in any year. It's a time machine back to a past reading of a crystal ball into our grandchildren's future. Radio was not foreseen, although tv was, and missed Interpretationen of how we use both make for some missed opportunities, still... Enjoy!

A couple of the commentators have dwelt on the "bad" ending, and I quite agree. But, let us look at the works of HGW. Admittedly, no scifi writer ever had more imaginative and fascinating plots. Yet, if we are honest, we must admit that his writings never measure up to his ideas; his characters are often wooden and he is seldom able to instill in the reader the realism that other scifi writers accomplish. And, his endings are usually abrupt, indicating either boredom with his story or an admission that he did not know how to end it satisfactorily. The most interesting part of this book is his anticipation of the 3-D printer to make clothes.

Disappointing, to be honest...

Expected better from H. G. Wells… but, let’s put the (decent) story aside and focus on the blatant racism! The police are all-black, and apparently consume a criminal’s flesh in one of the climactic scenes. The final part revolves around this man trying to destroy these all-black police. Additionally, a racial slur is employed once, with more mild slurs littering the story. That, my good sir, is clearly racist! Pretty well read early dystopia, however. Wasn’t expecting such a racist story, was really very shocked by the extent of that! Ahhhhhh well, the times...