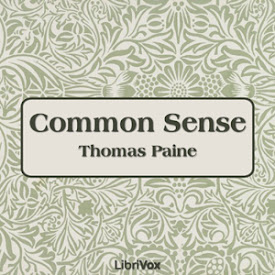 Common Sense, Paine's pro-independence monograph published anonymously on 10 January 1776, spread quickly among literate colonists. Within three months, 120,000 copies are alleged to have been distributed throughout the colonies, which themselves totaled only four million free inhabitants, making it the best-selling work in 18th-century America. Its total sales in both America and Europe reached 500,000 copies. It convinced many colonists, including George Washington and John Adams, to seek redress in political independence from the Kingdom of Great Britain, and argued strongly against any compromise short of independence. (Wikipedia) (2 hr 2 min)

Ch. 1 Origin of Government in General

Ch. 3 Thoughts on the Present State of America pt. 1

Ch. 3 Thoughts on the Present State of America pt. 2

Ch. 4 The Present Ability of America

Well done. I am very glad to have revisited Thomas Paine's concise pamphlet of arguments for independence. His clarity of thought coupled with his ability to express those arguments logically makes me appreciate the men of the period.

There are powerful statements in this piece. Not enough people understand how America was intended to function. This gives insight into how politics and government works.

A tome still full of wisdom applicable to today. It also is a good look into the thinking of people at that time, something quite different than is often taught today. It also delivered in easily understandable English with only quotes being in Old English.

this book is an amazing look at America's play for Independence. however the reader of the book leaves much to be desired.

our schools would be better with this

This is a great book. I am glad I found it.

5 stars for the book, but the reading was so stilted that I had to adjust the score. This should be required reading for every US citizen, and especially for those in public schools. It's obvious they know nothing about American history, and the parallels between King George and the present government are so remarkable that the book is as relevant today as when it was written. I do wish I had known there were two other readings of this book because it was painful to listen to this one. it seemed as if the reader had never read this book before and kept hesitating, stopping, choking, really, because he didn't know what was coming next. At first I thought it was a robotic rendition and then realized that there was a name set to it. I hope the reader gets more practice and realizes he has to be familiar with the material when he reads it.

what amazed me the most is how much of this essay found it's way into the US Constitution. further, he calls for a declaration of indeoendence. he argues in favor of freedom of religion, etc. he says, a house divided against itself cannot stand. hmm.. sounds familiar! now I move on to the books of john locke

As Important as Our Declaration

Look at all of these pretentious reviews. You can appreciate the work without trying to pat yourself on the back for your use of language not used by we insignificant "common folk" No one cares.