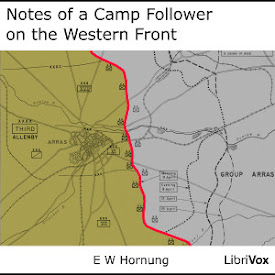 Notes of a Camp Follower on the Western Front

In 1915 Oscar Hornung, son of the famous author E W Hornung, was killed at Ypres after less than a year as a soldier in Flanders. He was only 20. Two years later E W Hornung volunteered to help run one of the YMCA canteens close behind the front line.

This book is Hornung’s own account of the time he spent in Northern France: first helping in a canteen, then running a library for the enlisted men. He wanted to be near the place where his son died, to meet the young soldiers who were fighting the war, and to make their lives a little better. More than anything, Hornung wanted to believe there was a greater purpose to he war: in his descriptions soldiers are always heroes, the struggles just, and leaders wise and kind.

But whatever his motivations and blind-spots, Hornung brought all his skills as a highly experienced novelist to the task of telling his story. We feel we are there with him while he talks to the soldiers, travels to the front line to serve cocoa and biscuits under fire, and finally sets up a lending library only a couple of miles from No Man’s Land. Even Sir Arthur Conan Doyle (a former friend who reported Hornung to the authorities for promoting pacifism) grudgingly admitted that this book contains some of the best descriptions of life on the Western Front.

The reader did an excellent job, very pleasant voice to listen to, the sound was very clear and I think this is the reason I listened to the whole thing .As I found the book was very wordy a lot of the time and the author's style of writing didn't " take me to the trenches ".

Notes of a Camp Follower on the Western Front Review

An excellent reading of a wonderfully written wartime journal. It's as though the author himself is still living and describing everyday life near the Front. 5 stars to Mr. Catterall for a wonderful recording!