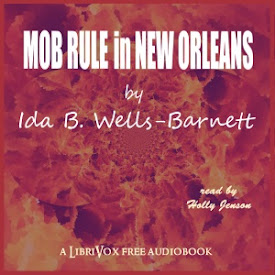 Born into slavery in Mississippi in 1862, Ida B. Wells-Barnett was an African-American journalist, newspaper editor, suffragist, sociologist, feminist, leader in the Civil Rights Movement, and one of the founders of the National Association for the Advancement of Colored People (NAACP) in 1909. Gathering her information from two New Orleans newspapers, Mrs. Wells-Barnett recounts in graphic detail the events of one particularly violent week in early 20th century New Orleans during which a mob "roamed the streets day and night, searching for colored men and women, whom they beat, shot and killed at will." A worse massacre was avoided, as stated by the author, because of "the determined stand for law and order taken by these great [newspapers] and the courageous action taken by the best citizens of New Orleans, who rallied to the support of the civic authorities." This account serves as chilling documentation of the mindless savagery of an anger- and hate-driven mob. - Summary by Holly Jenson (2 hr 27 min)

Murder on the Levee

A Victim in the Market

Was Charles a Desperado?

There's an old saying about those who are ignorant of history being doomed to repeat it. If those words are true, read this book so these events never happen again.

A sad time in our history

A very emotional story about being fed up! So many stories from the past make me embarrassed to be human and now I’m in Barris to be a human from Louisiana. This story is about Robert Charles a black man who is fed up with the one-sided racism and it being open season on black man. For two days he makes it open season on white men namely the police a problem that’s still in some peoples opinions versus today. This is a Gradebook and one I highly recommend. It is emotional and a sad statement on our humanity. Dear

Well read, an important part of our civil rights history

The press back then was prolific and many newspapers with differing opinions. Bravo to the newspaper that condemned the mass white massacre against the blacks. Today are mainstream press is owned by a few conglomerates. They just spew out press releases from our corporate run governments and little investigative reporting. thank god for the internet and grass roots media sites. Also never forget the 1921 Tulsa Oklahoma race riot where racist whites destroyed the largest african american business and manufacturing district in the US.

An early example of black exaggerations of white evils and total black righteousness. I mean, if you can't see the one-sidedness of this book, you are as blind as a bat. The epitome of black racism. The beginning of a lucrative industry creating victims and villians. Many black folks have made millions of dollars selling such wares.