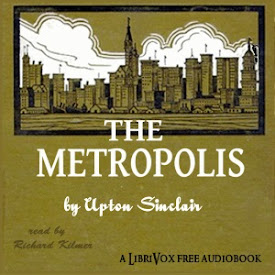 In this 1907 novel about the extravagant life of New York City’s high society, the author of The Jungle, presents a portrait of the wealthy elite. Allan Montague, a lawyer of thirty, moves to New York City from Mississippi, along with his mother and cousin Alice, to join his younger brother Oliver, who had moved to the city few years before. Allan discover that Oliver has become a member of a fast-paced social circuit comprising some of the most powerful members of the business class. Oliver introduces Allan to this exclusive group hoping that it will help Allan’s business. Sinclair describes the party life of the very rich, who spend vast sums of money on entertainment and new toys. Expensive cars, private trains, dinners attended by liveried servants, clothing costing thousands of dollars are described with attention to the enormous cost of it all. The author describing the alcoholism, marital affairs, malicious gossip, backstabbing, and shallow values of the wealthy of this Society. (Summary by Richard Kilmer) (10 hr 48 min)

I'm glad I looked there; it's listed among the newly finished readings. First I mist say, this is not a simple book to take on. None of Sinclair's books are. So to Mr. Kilmer, I say thank-you. It's been awhile since any more of Upton Sinclair's works have been tackled. And I've been waiting, patiently of course. As to your narration, Richard, both you're pace and inflection have greatly improved since the first time I listened to one of your readings; I'm fairly sure it was an H.G. Wells' writing. The book itself is, simply stated, one of necessity to be on everyone's list of books to read / listen to within one's lifetime. Highly recommend.

Influencers are not a modern phenomenon that arrived with social media on the internet. This book is a great read if you want to learn the history of influencers in 1905 Manhattan or to learn about New York society. Sinclair goes way overboard on the descriptions of material luxuries, so only 4 stars. Well read by Mr. Kilmer.

The story with backflip however the reader but hard to listen to.