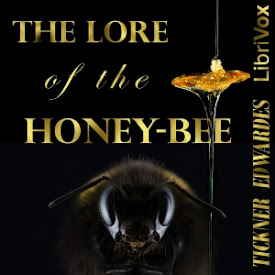 The Lore of the Honey-Bee

The sun shines — you know it has always shone, changeless as Time itself. With such a faith — unfounded and therefore incontestable — I came under the glow of one brave June morning, threading field after field of blossoming clover until I stood at the gate of the bee-garden over against the hill.

I raised the latch of the gate. Its sharp click drew to its full lean height a figure at the end of the garden, which was bending down in the midst of a wilderness of hives. The man came towards me coatless, his rolled-up shirt-sleeves baring wiry brown arms to the hot June sun.

Starting with the mythology of the honey bee, the author leads us along historic paths to a more modern understanding of this fascinating and undervalued creature and gives an insightful and sympathetic perspective of beekeeping, based on the wisdom gained through the many years of mastering his craft. (Summary by Steve C) (9 hr 51 min)

Introduction - The Oldest Craft Under The Sun

The Ancients and the Honey-Bee

The Isle Of Honey

Bee-Masters In The Middle Ages

At The City Gates

The Commonwealth Of The Hive

Early Work In The Bee-City

The Genesis Of The Queen

A Romance Of Anatomy

The Mystery Of The Swarm

'Where The Bee Sucks'

The Drone And His Story

Bee-Keeping And The Simple Life