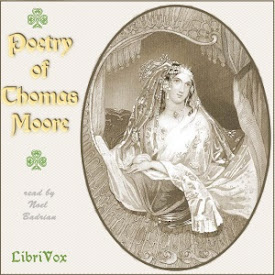 The Dubliner, Thomas Moore, born in 1779 was a poet, composer, musician, and writer. He is most famous for the 10 volume work "Irish Melodies" published between 1807 and 1834 with Sir John Stevenson, which consists of 130 of his poems set to music, much of it based on old Irish airs. "The Last Rose of Summer" and "The Minstrel Boy" are two of the most well known. Many of these "Melodies" are included in this collection. He is perhaps most infamous for having burned, at the request of the Byron family, the manuscript of Byron's memoirs which Bryon had left to him for publication after his death. During his lifetime, his reputation as a poet placed him alongside Byron and Scott and Shelly. His narrative poem Lalla Rookh for example was possibly the most translated poem of the time and earned him £3000, what was till then the highest price paid by an English publisher for a poem. This collection contains a version of the poem but without the linking or "framing" prose sections. A lovely edition of the full poem can be found here https://archive.org/details/lallrookhanorien00mooruoft with illustrations by Sir John Tenniel. Moore was an Irish Nationalist and turned down the post of "Irish Poet Laureate" as he felt it would require him to tone down his outspoken Irish national politics. Despite this, he counted the Regent - later King George IV as one of his patrons. Moore died on February 25, 1852 and though much of his work is now neglected, his enduring legacy is that his "Melodies" which were translated into practically every European language popularized Irish Music throughout the world. - Summary by Noel Badrian (5 hr 42 min)

Lalla Rookh: Paradise and the Peri

Lalla Rookh: The Light of the Harem

The Loves of the Angels

Satirical And Humorous Poems - Part 2: The Fudge Family in Paris

Satirical And Humorous Poems - Part 3: Fables for the Holy Alliance