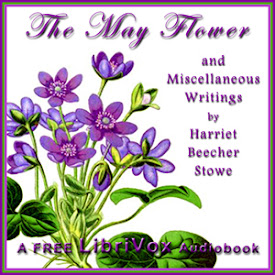 The May Flower and Miscellaneous Writings

Included herein are 35 charming short stories or humorous sketches, some written as exercises for the literary Semi-Colon Club of Cincinnati which Stowe belonged to for years, others published in magazines of the time, and 7 religious poems. Stowe honed her expressive skills on many of these before writing her first serious novel, Uncle Tom's Cabin, and 30 other books that followed. They showcase her considerable skill even as a young writer, and she made good money doing it, often supporting her family. This collection, named after a flower native to the east coast, likely the Anemone hepatica, or 'May flower', should not to be confused with another collection by Stowe, The Mayflower, which provides sketches of several descendants of the Pilgrims. - Summary by Michele Fry (14 hr 33 min)

4 Trials Of A Housekeeper

9 Let Every Man Mind His Own Business

11 The Ministration of our Departed Friends - A New Year's Revery

13 Christmas; or, The Good Fairy

17 Which is the Liberal Man?

18 The Elder's Feast - A Tradition of Laodicea

24 The Two Alters, or Two Pictures In One

25 A Scholar's Adventures In The Country

30 How To Make Friends With Mammon

31 A Scene In Jerusalem

35 Our Wood Lot In Winter

37 Poems - Pilgrim's Song In The Desert

41 Poems - When I Awake I Am Still With Thee

42 Poems - Christ's Voice In The Soul

A very interesting collection of vignettes of early Florida settlements just after the Civil War.